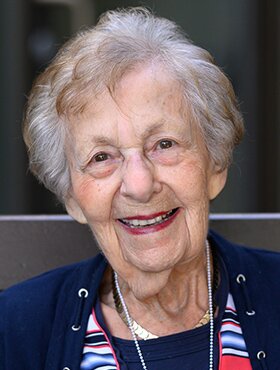 “The stars are not wanted now: put out everyone;

Pack up the moon and dismantle the sun.”

Calgary has just lost one of its brightest lights: Pat Smolensky died on November 17, 2021 at the age of 97. Hers was a life surrounded by a large circle of family and friends, and we will all mourn the loss of her warm glow.

Born Passey Kahanoff, Pat’s early years were spent in the little towns of Mildred and Canwood in Northern Saskatchewan during the Depression years. It was there, following in her mother’s footsteps, that her sense of social injustice was born, and it would lead her in later life to remedy it. (Active in the Jewish community and Chairwoman of the Hadassah Bazaar, she put her labour toward fighting poverty, sickness and women’s equality.)

She met her true love Benny Smolensky in 1943. He was a serviceman in the RCAF stationed just outside Winnipeg. After "mustering out" they moved to Calgary and were married, and it wasn’t long before Pat’s family joined them–for where Pat went her family followed. First came her Mom and Dad, Minnie and Abe, then her younger brother Al, and finally her older brother Syd. Pat and Benny put them up, sometimes all at once, and their home became the hearth of the family. It was in this hearth that Pat and Benny raised their four beautiful and accomplished children: Arthur (Aline), Barbara (Ilaan), Elaine (Ted) and Jason (Wendy).

Pat was a warm force that brought and kept her nuclear family together, and she brought this force to bear on all her relationships. Gregarious, open, kind and generous, Pat made friends wherever she went: A painter on a service call; a bookkeeper; a hairdresser; a trainer; the person next to her on a flight–all became friends within minutes of meeting her, and once her friend, you were forever in her orbit. On her 90th birthday over 150 friends and relatives came together to celebrate.

Food and conviviality nourished and lubricated these relationships, and with so many friends, Pat entertained perpetually. She was a marvelous cook–food was her language of love. Those lucky enough to sit at her table, were told they were precious through sumptuous stews, cabbage rolls, chicken soup, shells and kasha, and mouth-watering roly poly. And NO ONE will forget her legendary scones, the recipe for which is being circulated around the whole of North America. She would teach anyone who asked the secret to making these scones, but she was a perfectionist and only the most exacting of sous chefs could meet her bar.

She was also fiercely competitive–no surprise given her middle position between two dominating brothers. The skills they honed in her through pancake eating contests in their youth found the perfect outlet when she discovered duplicate bridge as an adult. Pat was an outstanding player, the second person in Alberta to achieve the rank of Life Master, and in 1966 was chosen to represent Canada at the World Bridge Olympiad in Amsterdam. Her bookshelves were lined end to end with trophies garnered throughout Canada and the U.S. where she defeated some of the world’s top players. She loved to tell the stories of playing bridge against Omar Sharif, and hosting and playing with Charles Goren (the Father of Modern Bridge). But of all her bridge accomplishments, her greatest pleasure was teaching hundreds of novices how to play. She did this for years while raising her kids, and in this she took great pride.

Still, nothing could compare to the pride both she and Benny had in their grandchildren, Jesse, Nahani, Amy (Brent), Erin (Chad), Jonathan, Celine (Tyler), Stephanie, and Shawn (Maura). Pat would tell anyone who listened about their accomplishments. And while Benny, her one and only true love, passed away suddenly in 1993 without meeting his lovely granddaughter Alisha, nor any of his great-grandchildren (Callisia, James, Jordana, Eric, Maya, Morgan, and Ben), Pat showered enough love on those kids for both of them.

Pat Smolensky led a life dedicated to the happiness of others. She was our guiding light on how to live a fulfilling life and we will all miss her dearly.

A Private Family Service will be held. For those who wish, In lieu of flowers, memorial tributes may be made directly to Canadian Hadassah-WIZO (CHW) https://www.chw.ca/support-us/.  May her memory be a blessing.

Share Your Memory of
Passey
Upload Your Memory View All Memories
Be the first to upload a memory!