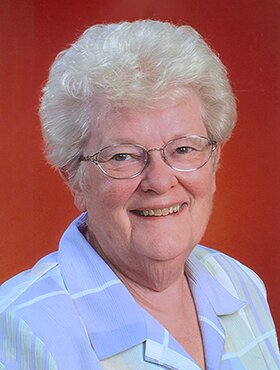 Patricia Mary Senft, born January 14, 1937, in Calgary, Alberta. Daughter of William (Bill) and Gwyn Garland, Pat was the youngest of four children and the only one born in a hospital (Holy Cross). Growing up in Scarborough, she attended St. Mary’s Catholic School. Her love of nature and the mountains started with family outings and camping west of Cochrane. Being an animal lover, she loved to help herd the cattle on the Bowlen ranch, west of Cochrane. She also enjoyed travelling to Hawaii and Florida, as well as trips to her sister’s farm in Montreal, where she joined in on the shenanigans with her nieces and nephews.

Planning on being a career woman, she became the Executive Assistant to the President of the Land Department of CP Rail - which became what we all know now as Encana (Ovintiv today). Living in Sunnyside, Calgary, she then met her future husband and soulmate, Gary Senft. The two met in August of 1971 and were soon married in May of 1972. They moved to Mount Pleasant, where their daughter BettyAnn was born. Living in Mount Pleasant, she discovered her love of gardening when she unearthed the “dead banana.” Precious followed her to every house thereafter and now her beloved Japanese Peony resides at her current address, front and centre making all her neighbours envious.

The Senfts moved to Airdrie in 1980, meeting her lifelong friends, lovingly known as The Sandstone Crew. Attending monthly “lotto-coffees”, the crew is hoping that Pat will watch over them all, to bring them some good luck for once in 40 years!

She unfortunately lost Gary in 1990 but continued to raise BettyAnn in Airdrie, where she enjoyed selling Avon for twenty-nine years, joined bowling leagues, crocheting and crosswords. Even into her golden years, she was able to continue her love of the mountains and nature, by becoming a professional picnicker, dragging her daughter to the mountains whenever she had free time.She is finally home and together with Gary, once again.

She is survived by her daughter Elizabeth Ann (BettyAnn).

Pat was predeceased by her beloved husband Gary; parents, two sisters and her brother.

A private service was held in Pat’s memory. If friends so desire, memorial tributes may be made directly to the Cochrane Humane Society, 62 Griffin Industrial Pointe, Cochrane, AB, T4C 0A3, Telephone: (403) 932-2072, www.cochranehumane.ca   or to the Canadian Wildlife Federation, 350 Michael Cowpland Drive, Kanata, ON K2M 2W1, www.cwf-fcf.org. Condolences, memories, and photos may be shared and viewed here.