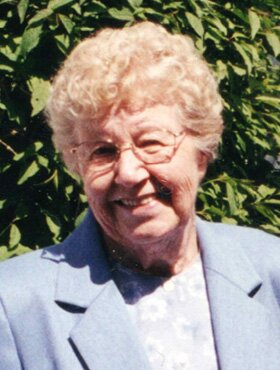 It is with sadness, love and gratitude that the family of Alice Provost announce her passing on November 18, 2021.

Alice grew up as an only child on a farm near Ardmore, AB. Alice and Jack met on a blind date in Castor, AB in 1948 and married in 1950. They made Calgary their home and bought a house in Altadore in 1959. Alice and Jack enjoyed camping in BC and had travelled coast to coast in Canada. They also had memorable trips to Arizona with friends. The simplest pleasures in life brought Alice joy. Her family marvels with pride that she was still living in her home at 93 years old, planting flowers and enjoying her independence.

Alice was the beloved mother of Robert Provost and Marie (Allan) Sinton, and the proud grandmother of Curtis Sinton (Danielle Perreault) and Amy (Tyler) Ford. The legacy of her thoughtfulness and strength will live on through them. Alice was predeceased by her parents, Antonio and Germaine Paquin, her husband Jack Provost, and her daughter-in-law Beverly Gordon.

In honoring Alice’s wishes, there will be no funeral. She will be laid to rest with her parents, husband and daughter-in-law at a private family internment. Condolences, memories and photos may be shared and viewed here.

The family extends their gratitude for the kind care from Chinook Hospice. If friends so desire, memorial tributes may be made directly to the Chinook Hospice, 1261 Glenmore Trail S.W., Calgary AB T2V 4Y8, Telephone: (403 258-0040.

Share Your Memory of
Alice
Upload Your Memory View All Memories
Be the first to upload a memory!
Share A Memory