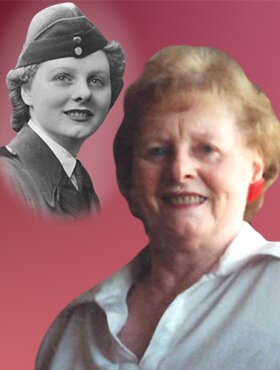 Kay was born in Inverness, Scotland on December 20, 1924. She worked for the fire service during WW2 and was stationed in Edinburgh. There she met and married Ervie Jackson, a Canadian soldier in 1944. At the end of the war she emigrated to Canada and settled in Calgary. Kay was a stay at home mom and lovingly raised her two sons, Andrew and Gary. Guests in her home were always welcome and well fed. She was most happy surrounded by family, and she cherished a walk along the ocean. Thrifty to a fault; she thought it was a Scottish genetic trait. She always thanked everyone for even the smallest kindness. Even in deep suffering she was the most gracious of human beings.

Kay is in the hearts of her sons, Andrew (Marilyn) and Gary (Alix); her grandchildren, Joel (Meg), Lauren (Sunil), Claire (Adrian), Cam (Sinda), and Morgan; and her great-grandchildren, Ezekiel and Capri; as well as her cherished sister, Dot and her family. We were lucky to have her. Kay was predeceased by her husband Ervie in 2010, and previously her parents Andrew and Dorothy, and infant daughter Carolyn.

Kay’s life will be celebrated in a private family service.  Condolences, memories and photos may be shared and viewed here. If friends so desire, memorial tributes may be made directly to the Salvation Army, 1731 29th Street SW Calgary, AB, T3C 1M6, online at www.salvationarmy.ca, or by phone 403-410-1112.

We are so grateful for the staff at Sarcee who made Kay feel as precious as family. Their kindness is greatly appreciated by the family. So too, the medical workers at Unit 81 at Rockyview Hospital.

In living memory of Catherine Jackson, a tree will be planted in the Ann & Sandy Cross Conservation Area.

Share Your Memory of
Catherine (Kay)
Upload Your Memory View All Memories
Be the first to upload a memory!