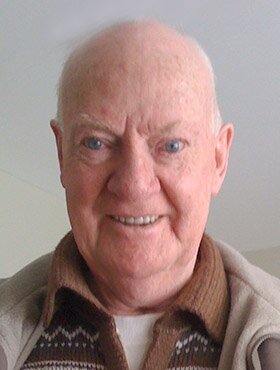 Robert Barclay, beloved husband of Jeanie “Sheena” Barclay (nee Ferguson), of Calgary, AB, passed away on Saturday, November 20, 2021 at the age of 90 years.

The sixth of seven boys, Bob was born in Glasgow, Scotland on New Year's Day 1931. He was a new year’s baby whose birthday was always celebrated with family and friends with a wee dram...or two. Bob participated in various sports throughout his life. Soccer, later becoming a soccer referee, badminton, racquetball, golf, hunting, fishing and camping. Always active, always full of life. Bob and Sheena immigrated to Calgary in 1965 and Bob started his first job in Calgary in accounting at the Firestone Plant on Blackfoot Trail. First major purchase, a new house in Acadia and a red 65 Ford Fairlane with snarly performance, he loved that. He and his wife Sheena joined St. Andrew’s Presbyterian Church on Heritage Drive, and both quickly became long-term singers in the Choir. Singing and Scottish country dancing were passions of their lives. In 1978, Firestone closed the Calgary plant and Bob joined his older brother James in his newly formed accounting company, Barclay Management, both remaining there until they retired themselves and the company in 2012. He and Sheena spent many summers camping in the Okanagan, Peachland being their favourite. Many good memories there. Bob was the last remaining Barclay brother. Always the first to lend a hand when needed, he had a zest for life and tried to live it to the fullest…He succeeded.

Bob will be dearly missed by Sheena and all his relatives and many friends.

Funeral Services will be held at St. Andrew’s Presbyterian Church (703 Heritage Drive S.W., Calgary, AB) on Monday, November 29, 2021 at 1:30 p.m. Condolences, memories and photos may be shared and viewed on Bob’s obituary at www.McInnisandHolloway.com.