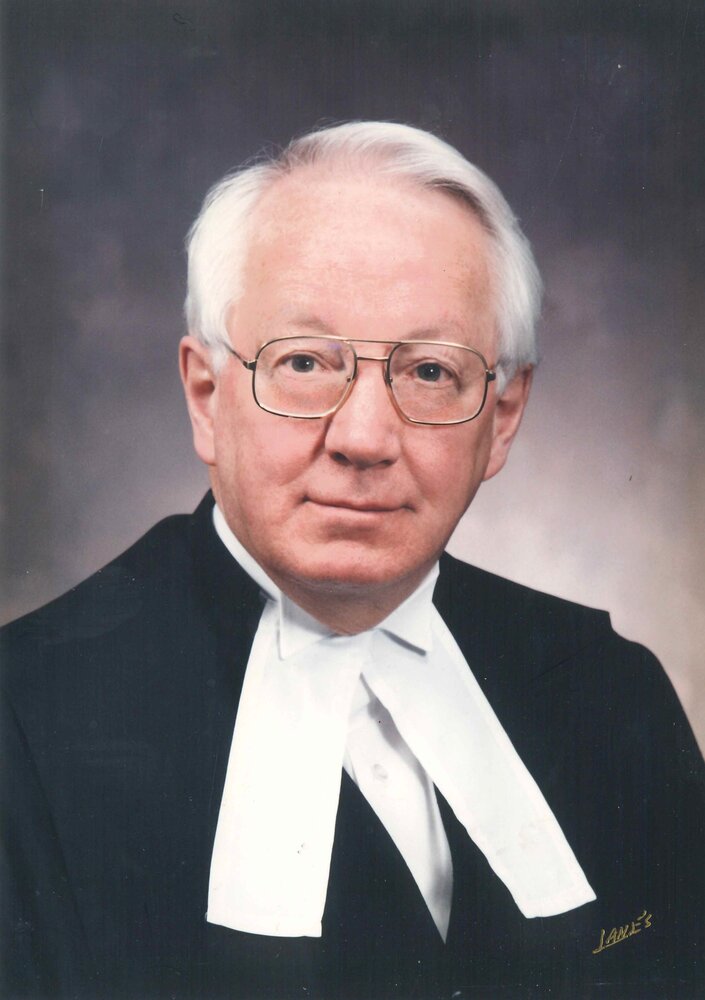 It is with a profound sense of loss that the O’Leary family announces the death of Willis (Bill) Edward O’Leary. Willis was born on September 6, 1931, at Vulcan, AB, and passed away on November 21, 2021, in Calgary, AB.

Willis’ formative years were spent in Calgary where his family moved in late 1937. He had countless stories of youthful adventures and misadventures growing up in Calgary’s Mission district.  Most of these stories also involved his brother Jack and many involved hockey, a lifelong passion they shared.  Willis excelled at hockey in his teen years and graduated from St. Mary’s Boys High School in 1948. After a year of playing junior hockey in Calgary and a trip to the New York Rangers training camp, Willis accepted a hockey scholarship to the University of Denver. He set scoring records on the ice and made many lifelong friends off the ice before graduating with a degree in Business Administration in 1953. He described his experience in Denver as a watershed in his life, where he realized that he could succeed academically and that his opportunities extended far beyond playing hockey.

After a “gap year” playing professional hockey in the British National League Willis returned to Calgary where he was employed by Canadian Gulf Oil Co. for several years. He saved his money to pursue what would become his second great passion and attend law school.  He was admitted into law school at the University of British Columbia in 1959.  There he attained the highest grades in his class each year, earned numerous academic awards, and was awarded the gold medal for highest standing in his final year. He made lifelong friends there too, keeping in touch with many of his classmates for the remainder of his life. More importantly it was during his law school years that he met and married Betty, marking a second happy watershed in his life.

Following his graduation from UBC in 1962, the newly married Willis and Betty set off for Boston where Willis attended Harvard Law School under scholarship, graduating in 1963 with a Master of Laws degree. His eldest son John was born in Boston as Willis’ studies at Harvard concluded and the young family then returned to Calgary where Willis began his career as a lawyer. Son Tom and daughter Shannon soon arrived, and his family became Willis’ third and greatest passion. Family came first. As a father and husband, he was kind, understanding and forgiving without reservation. He was interested in his children’s lives, supported them in their sports, music, and other pursuits and, despite a demanding career, made sure he was home in Lakeview for family dinner every night to share his humor and wisdom with Betty and his children. His sharing a joke, a story, or his views on the events of the day would often result in lively debate, discussion, or laughter – sometimes all three.  As his children grew up, he generously supported their education, their marriages, his grandchildren, and his great grandchildren whom he loved dearly and in whom he took immense pride.

Willis practiced law in Calgary for twenty years starting with the Fenerty Robertson firm and then forming Lutz Westerberg O’Leary and Stevenson in 1966. He greatly enjoyed the practice of law and was dedicated to providing his clients with the best possible advice and representation on every matter, large or small. He was very active in the affairs of the Law Society of Alberta and the Canadian Bar Association including serving on the Calgary Legal Aid Committee and the Legal Aid Appeal Committee, as well as directing the Alberta Bar Admission Course on behalf of the Law Society for three years. He was a founding director of the Legal Education Society of Alberta, served as its president, and was a director of the Legal Archives Society of Alberta for many years.

In 1984 he was appointed as a judge of the Court of Queen’s Bench of Alberta.  In 1994 he was appointed to the Court of Appeal of Alberta where he served until his retirement in 2006. As a trial and appellate judge, he heard numerous high profile and complex commercial and criminal cases and authored many decisions which continue to be relied upon today. Willis was known for his deep understanding of the law, his fairness and his graciousness toward litigants, counsel, law clerks, court staff and colleagues. He believed that the Court required respect but that the Court had an equal obligation to respect those appearing before it. He appreciated the friendships he formed with his clerks and his fellow judges in both courts and valued their counsel and camaraderie throughout his judicial career.

Failing eyesight presented a great challenge over the last half of Willis’ life. He refused to be defeated by this disability and he compensated with increased organization and hard work. He rarely if ever complained. He never lost his wonderful sense of humor or his generous spirit. His ability to overcome this significant adversity and continue to excel in his career was remarkable and an inspiration to those closest to him.

Willis had a strong sense of community and believed that he was obligated to do what he could to contribute. This was his fourth passion. His contributions included serving as Chair of St. James Parish council, president of the Lakeview Community Association president of the Southwest (now Calgary Royals) Athletic Association, and he was a founder of what is now Saint Mary’s University in Calgary.  Willis believed strongly in education as a key element of community and that education should be accessible to all regardless of economic circumstances. He and Betty established the O’Leary Family Scholarships through Saint Mary’s University to assist students in need of financial assistance in completing their studies.

Willis left a great legacy as a lawyer, judge, husband, and father. He will be dearly missed but well remembered.

Willis is survived by Betty O’Leary (Barrett), his wife of 59 years; his children, John (Peggy) of Portland OR, Tom (Shannon Young) and Shannon (Dan) Lalonde of Calgary; seven grandchildren, Ileane Athougies (Travis) of Portland, Willis O’Leary of Cambridge MA, Claire O’Leary, Michael O’Leary, Lauren O’Leary, Brenna Lalonde and Rochelle Lalonde, all of Calgary, and two great-granddaughters, Judith and Victoria Athougies. He is also survived by two sisters, Patricia Marilyn Shaw and Judith Theroux, both of Calgary, AB, and by many nieces and nephews.  Willis was predeceased by his father Cecil Patrick O’Leary in 1937, his mother, Helen O’Leary (Maloney) in 1988 and his older brother John Emmett (Jack) in 2007.

Relatives and friends are invited to the following events:

Those attending will be asked to provide valid government identification (with name and date of birth) AND confirm one of the following: (A)Provincial vaccine record with QR code (paper or digital); OR (B)negative COVID test (within 72 hours); or (C)valid medical exemption (signed letter); OR (D)under 12 years of age.

Condolences, memories, and photos may be shared and viewed on Willis’ obituary here.

If you wish, in lieu of flowers, donations may be made in his honor to St. Mary’s University at 14500 Bannister Road SE, Calgary, AB, T2X 1Z4, to The Canadian National Institute for the Blind (CNIB) at 15 Colonel Baker Place NE, Calgary, AB, T2E 4Z3, or to a charity of your choice.

Share Your Memory of
The Honorable Willis Edward
Upload Your Memory View All Memories
Be the first to upload a memory!