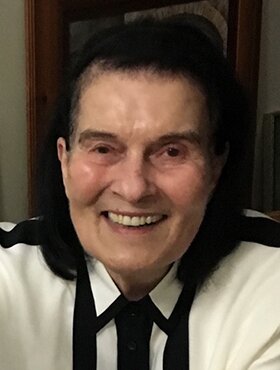 It is with great sadness that the family of Elena Leah Manning (nee Palamarek) of Calgary, AB, announces her peaceful passing on Monday, November 22, 2021, at the age of 92 years.

Leah was born in Smoky Lake, AB, on June 27, 1929. She was the second youngest of nine children born to Daniel and Elena Palamarek, who immigrated to Canada from Ukraine for a better life. Leah had a lengthy career as an executive secretary in Calgary's oil patch, along with many years in Staffing and Personnel with the RCMP. She enjoyed curling and bridge in her younger years and was an avid reader and sports fan (especially baseball, golf and tennis).

Leah is survived by her son and daughter-in-law, Todd and Denise Manning of Metchosin, BC; and daughter Janice Fercho of Calgary, AB. Leah was a loving Baba to her three grandsons, Philip and Eric Manning of Metchosin, BC, and Jacob Fercho of Calgary, AB. She is also survived by her brother Michael Palmer of White Rock, BC, as well as several other nieces and nephews.

Condolences, memories and photos may be shared and viewed here.

In lieu of flowers a donation may be made to the charitable organization of your choice.

We wish to thank the staff at St. Teresa Place, Grace West, along with Dr. Vanessa Millar for their attentive and compassionate care.

Share Your Memory of
Elena
Upload Your Memory View All Memories
Be the first to upload a memory!