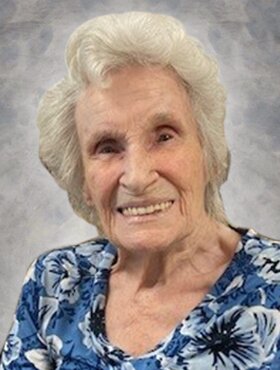 Audrey was born in Calgary, AB to her parents Robert and Edith Dancocks. She had two sisters, Phyllis, and Hazel. Audrey met Gordon Williamson and they were married and began starting a family. They had three children, Doug, Donna and Robert. Audrey had two grandchildren, Corey Nelson and Valerie Nelson.

Audrey is survived by her two sons, Doug and Robert; her two grandchildren, Corey Nelson, and Valerie Nelson; and many members of her extended family.

Audrey was predeceased by her husband, Gordon Williamson who passed away on June 12, 1982; her daughter Donna passed away January 12, 2021; her sister, Hazel Mills passed December 13, 2011 and Hazel’s husband, Dave Mills passed September of 2008; and Dave Roberts who passed November 25, 2016.

Funeral Services will be held at McInnis & Holloway (Chapel of The Bells, 2720 Centre Street North, Calgary, AB), on Friday, April 22, 2022 at 2:00 p.m. Reception to follow in the Hospitality Centre at the Funeral Home. Those attending will be asked to provide valid government identification (with name and date of birth) AND confirm one of the following: (A)Provincial vaccine record with QR code (paper or digital); OR (B)negative COVID test (within 72 hours); or (C)valid medical exemption (signed letter); OR (D)under 12 years of age. Condolences, memories, and photos can also be shared and viewed here.

Share Your Memory of
Edith "Audrey"
Upload Your Memory View All Memories
Be the first to upload a memory!
Share A Memory
Send Flowers