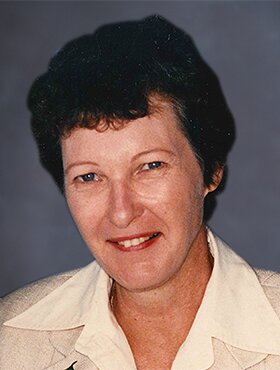 Valerie Murray of Calgary, AB, passed away peacefully on Monday, January 3, 2022, at the age of 84 years.

Valerie was born as the only child to Freida and Sidney Marshall in Mannum, South Australia on April 28, 1937.  She and a friend from school decided to go into nursing and Val became a Registered Nurse. Realizing that this provided a good opportunity to work abroad for a year or two, the two girls made plans to travel to Canada in 1958. In 1960, Val married John Murray and they moved down to Calgary.

After extensive worldwide travel with the family, Valerie and her family settled down in Calgary in 1974.  She later started working for the ERCB working with the library staff.  After Valerie retired from the ERCB she started working at Safeway where she was very happy making many friends with the staff and customers. Valerie was a faithful member of St. Paul’s Anglican church where she was affectionately known as the “Hug Lady.”

Valerie is survived by her daughter and son-in-law, Sandy and Stephen Hourihan from Spartanburg, South Carolina; her son and daughter-in-law Allen and Fiona Murray; and grandchildren, Iain and Sara Murray, residing in Calgary.

A family memorial will be held for Valerie later in the year.

Share Your Memory of
Valerie
Upload Your Memory View All Memories
Be the first to upload a memory!
Share A Memory
Send Flowers