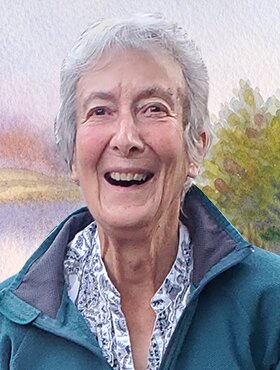 Joanna Forrest, beloved wife of Francis Peter Forrest, of Cochrane, AB, passed away on Wednesday, January 5, 2022 at the age of 79 years.

Joanna was born in Guapo, Trinidad on July 25, 1942. She lived there during WWII, where her father worked as a geologist discovering oil for the war effort. The family moved from Trinidad to Bedfordshire, England in 1947.

She married Peter in 1966 and moved to Mckenzie, Guyana and had their first daughter Alison. Peter worked in the bauxite mining industry. They returned to Canada and settled in Faro, Yukon in 1971. After the winter they relocated to Fort McMurray in 1972. Francine and John were born in Fort McMurray and the family moved to Calgary in 1980.

Joanna enjoyed walking and biking on the Calgary park trails. She volunteered as an ESL teacher at Calgary Learning Centre and in multiple libraries across Calgary. She was a member of The Women’s Canadian Club of Calgary, and the neighbourhood S&B.
Joanna loved to travel and made many friends along the way. She was an immensely positive person and always saw the best in people and the world. Her friends and family were the most important part of her life.

If friends so desire, memorial tributes may be made directly to the Heart & Stroke Foundation of Alberta, 200, 119 – 14th Street N.W., Calgary, AB T2N 1Z6 Telephone: (403) 264-5549, www.heartandstroke.ca. or to The Alzheimer Society of Alberta and the Northwest Territories, Administrative Office, 10531 Kingsway Avenue, Edmonton AB T5H 4K1.  Tel: (1-866) 950-5465, www.alzheimer.ab.ca. Joanna was an expert hugger.  Please hold your family and friends close and enjoy the warmth of love. A Celebration of Life in honour of Joanna will be held in the spring. Condolences, memories and photos can also be shared and viewed here.

Share Your Memory of
Joanna
Upload Your Memory View All Memories
Be the first to upload a memory!
Share A Memory
Send Flowers