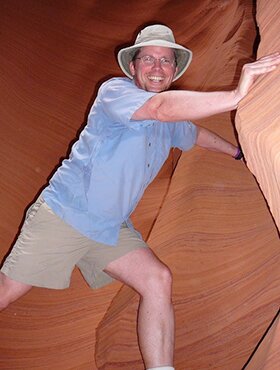 Sadly, with his loving family by his side, Michael White passed away peacefully in Calgary on January 6, 2022 at the young age of 58.

Michael, as a son of an Air Force dad, was born in Ottawa, and raised in Germany, Sardinia and Cold Lake. Following in his father’s footsteps, he joined the Canadian Army Reserve, Loyal Edmonton Regiment, where he proudly served as a soldier parachuting out of airplanes for seven years. He continued travelling the world as a computer business continuity disaster recovery specialist, providing his expertise to his customers with in-person company visits, speaking at VMware conferences and writing a very popular technical blog. With his love for great food and equally fine wine, he was known for hosting dinners and getting private kitchen tours at the best restaurants. His curious nature, engaging personality, varied experiences and captivating storytelling skills gave Michael the ability to speak to anyone and everyone in any setting, be it at a Marriott bar or the streets of Beijing. Michael augmented his love for travel with his wife and best friend, Angela, enjoying hiking nearby in the Rockies and American Southwest and with multiple visits to Eastern and Southern Africa to enjoy time, especially, with the elephants on walking safaris.

Michael’s ALS diagnosis was confirmed in August 2020, which later included a diagnosis of frontotemporal dementia. These two diseases took a lot from Michael, but it did not take away his zest for the outdoors and spending quality time with Angela exploring every Calgary city park trail with his electric wheelchair. Angela wishes to thank all of his colleagues and friends from around the world who kept in contact with Michael, casting light on his days during his struggle with both ALS and dementia.

Michael is survived by his wife Angela Corsi, his sister Kathy White and his father, Robert White. He was predeceased by his mother Rose Marie White who also died of ALS.

A Private Family Service will be held. Condolences, memories and photos can also be shared and viewed here. If family and friends so desire, in lieu of flowers, the family requests that memorial tributes be made in Michael’s memory directly to the A.L.S. Society of Alberta, 7874 – 10thStreet N.E., Calgary, AB T2E 8W1, www.alsab.ca, I AM ALS, https://iamals.org/, or the Alzheimer’s Society of Canada, https://alzheimer.ca/en.