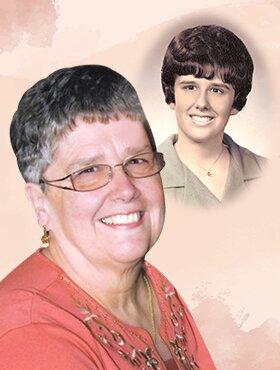 Bonnie was born in Mason City, Iowa, on April 21, 1948, daughter of Mary Jo (nee Kollasch) and Harry Jorgensen. In 1972, she moved to Alberta. Bonnie graduated from Newman Catholic High School in 1966 and then trained at St. Joseph’s Mercy Hospital, Mason City, Iowa, in the radiology department. She worked in the medical field for a large portion of her life, finishing in the banking industry. With her focus on helping people, she prided herself on doing a great job in all her endeavors.

On August 17, 1968, Bonnie married Jim Wolske at St. Joseph Church, Mason City, Iowa and the two of them began a lifetime of adventures. Their lives carried them throughout Alberta and British Columbia, and they finished their journey in Sundre, Alberta. Along the way, Bonnie made many lifelong friends, which is a true testament to her character. Besides being Jim’s biggest supporter, Bonnie also enjoyed crocheting and walking daily. Her love of music, especially Elvis Presley, as well as her love of dancing was evident in her daily life. Bonnie’s most memorable vacations were the family reunions in Banff, Alberta and Keystone, Colorado. She will be most remembered for her kind and caring demeanor, and undying love for her husband, Jim Wolske.

Bonnie is survived by her three sons and daughters-in-law, Andy and Connie (nee Kleist) Wolske of Regina, SK, Matt and Rhonda (nee Selk) Wolske of Calgary, AB, and Adam Wolske and Denise Korn of Victoria, BC; and six grandchildren, Morgan, Hailey, Carter, Erica, Peter, and Patrick. Bonnie is also survived by her three siblings and their spouses: her brother, Gerald (Jerry) and Mary Jorgensen of Dubuque, Iowa, her sister Sharon and Mark Gietl of St. Charles, Missouri, and her brother Dan and Jackie Jorgensen of Corpus Christi, Texas; as well as numerous nieces and nephews.

Bonnie was predeceased by her loving husband Jim Wolske, and her parents, Mary Jo and Harry Jorgensen.

A Funeral Service will be held, on Friday, January 14, 2022, at 12:30 p.m. Family and friends who are unable to attend in person are invited to join Mrs. Wolske’s service streamed live (see below) on the day of the service. Condolences, memories, and photos can also be shared and viewed here. If friends so desire, memorial tributes may be made directly to the Ascension Catholic Parish Diocese of Calgary at www.ascensionparish.ca/giving, or to the Heart & Stroke Foundation of Alberta, 200, 119 – 14th Street N.W., Calgary, AB T2N 1Z6 Telephone: (403) 264-5549, www.heartandstroke.ca.

The family would like to extend their special thanks to the staff at AgeCare SkyPointe, Calgary, Alberta.

Share Your Memory of
LaVonne
Upload Your Memory View All Memories
Be the first to upload a memory!