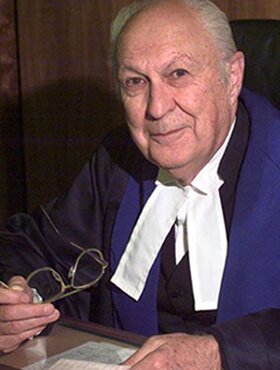 It is with great sadness that the family of Herbert A. Allard announce that our beloved father, grandfather, and great-grandfather passed away peacefully at the Foothills Medical Centre on Monday, January 10, 2022, with his family at his bedside. Herb was a retired Family and Youth Provincial Court Judge.

Herb was born in Calgary, AB, in 1926. Growing up as an impoverished child of the Great Depression, Herb had an honest feel for the street level problems in society. Herb was mentored by many famous Albertans including H.D. Cartwright and Solon Low and was a proud member of the Knights of the Round Table for over sixty years. Herb received his B.A. from the University of Alberta in 1949 and his B.S.W. from the University of British Columbia in 1951.

After a decade as an outstanding child welfare worker and then Chief Probation Officer, in 1959, he was appointed Juvenile and Family Court Judge in Lethbridge. At 33, he was Canada’s youngest Family Court Judge, becoming a Family Court Judge in Calgary in 1961. Herb reluctantly retired in 1996 but continued to stay active and involved. Herb received an Honorary Doctor of Laws from the University of Calgary in 1997 which was a proud moment for him and his family. He enjoyed being a marriage commissioner after retiring.

Herb had a prodigious mind and could discuss infinite topics including economics, the arts, history, religion, and politics. He liked to say he was “born talking”.

Herb married his wife Heath Paynter at Shangri-La in 1949 and lived all his life in Mount Pleasant. Herb started working at a very young age and supported his widowed mother until her passing.

First and foremost a compassionate man, his life’s work was to make a difference, and he did, touching the lives of so many. He had an ability to think beyond the traditional cloisters of the law while never taking himself too seriously.

Herb said he was “the luckiest guy in the world, he had a job he loved, a good family, a good life, love, great teachers, and friends.”

“To live in the hearts of those we love is not to die.”

At Herb’s request, he will be cremated, and his remains placed at his parent’s grave. Condolences, memories, and photos can also be shared and viewed on Herb’s obituary at McInnisandHolloway.com.

In living memory of Herbert Allard, a tree will be planted in the Ann & Sandy Cross Conservation Area.

Share Your Memory of
Herb
Upload Your Memory View All Memories
Be the first to upload a memory!
Share A Memory
Send Flowers