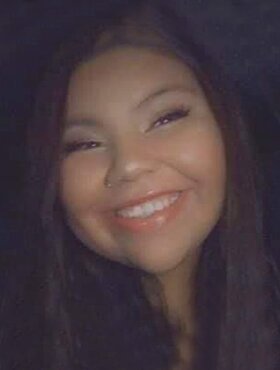 It is with great sadness and heavy hearts that we announce the passing of Shenay Aasialee Ryder on Tuesday, January 11, 2022 in Calgary, Alberta at the age of 19 years old.

Shenay suddenly passed away surrounded by family on January 11, 2022. She was born on March 8, 2002 in Canmore, Alberta. Shenay was raised with the strong knowledge of the Stoney Nakoda traditions and culture. She attended Exshaw, Morley Community School and furthered her education at the Canmore Collegiate High School. She was proud of her many favourite activities. She loved playing sports and excelled in Volleyball, where she was able to shine. She made many friends that were a part of athletic and sports programs. She travelled to California as an extracurricular activity to Disney Land as a participant in the Nakoda Cadet Youth Program. She surrounded herself with friends that had interests in actively supporting youth groups and youth programs within the surrounding communities. During her studies, she was enrolled in the Canmore Crusaders Volleyball team. In Exshaw, she was part of the Exshaw Eagles Volleyball Team and in Morley, she was enrolled in the Nakoda Defenders and the Stoney Nakoda Volleyball Teams of Morley. Through her many endeavours, Volleyball was her favourite sport where the court was her favourite place to be. She was competitive and travelled to many games in the surrounding areas. Shenay took pride in all of her achievements and endeavours, proudly representing Stoney Nakoda Nation.

As a young lady, Shenay was kind, caring, respectful and loving to all who knew her. She enjoyed spending quality time surrounding herself with her family and friends. She will be dearly missed by captivating the hearts of those who knew her, especially her volleyball teammates.

Shenay was known to her family as Nae Nae. She was very affectionate when it came to her nieces, nephews, siblings and cousins. Nae Nae would always offer to help where she felt it was needed. She had a radiant smile that would brighten up any room. Her smile and laughter will be one that can never be replaced. Both her and her brother Keegan were joined at the hip. They would often be seen laughing, teasing and playing side-by-side. They shared a bond so close, if they were apart they would always find a way to contact each other.

She also had a unique bond with her grandmothers, Patsy and Dianne. She adored all the children. She loved everyone she knew young and old. She was the bestest big/little sister. Shenay often supplied meals for the Chiniki elders committee meetings.

Funeral Services will be held at the Morley Gymnasium (Morley, AB) on Monday, January 17, 2022 at 1:00 p.m.  Graveside Service to follow at Chiniki Cemetery (Morley, AB).  Condolences, memories, and photos may be shared and viewed at www.McInnisandHolloway.com.

Share Your Memory of
Sheania
Upload Your Memory View All Memories
Be the first to upload a memory!
Share A Memory
Send Flowers