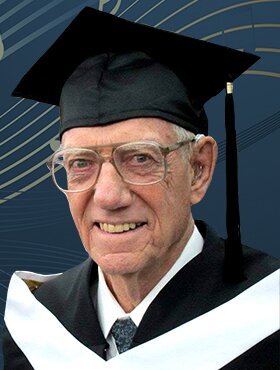 Neal was born in Lethbridge, Alberta, Canada on February 20, 1925.  Neal graduated from the University of Alberta with a master’s degree in BSC Physics degree in 1947, BSC Petroleum Engineering in 1962 and a MSC Petroleum Engineering in 1964. Neal married Wilna Jocelyn (Joy) on October 16, 1952. Neal was a lifetime member of APPEGGA. He accomplished much throughout his life and was particularly proud of receiving Bachelor of Arts in Philosophy in 2011, also Bachelor of Arts in Communication and Cultures (Multi disciplinary) from the University of Calgary in 2011. Neal took up the bass clarinet and joined three bands, Rocky Mountain Band, Cappy Smart, and the Foothills Band. He played with the Cappy Smart band by invitation to New York City at the Carnegie Hall and Central Park. Neal’s most memorable vacation was when he traveled to the UK along with his youngest boy Mark. They visited numerous relatives and saw the countryside.

Neal will be most remembered for his love of being with family in Kelowna and Sylvan Lake, and any swimming pool.

Funeral Services will be held at McInnis & Holloway (Park Memorial, 5008 Elbow Drive SW, Calgary, AB) on Wednesday, January 19, 2022 at 2:00 p.m. Reception to follow at the Funeral Home. Those attending will be asked to provide valid government identification (with name and date of birth) AND confirm one of the following: (A)Provincial vaccine record with QR code (paper or digital); OR (B)negative COVID test (within 72 hours); or (C)valid medical exemption (signed letter); OR (D)under 12 years of age. Condolences, memories, and photos may be shared and viewed here.

Share Your Memory of
Neal
Upload Your Memory View All Memories
Be the first to upload a memory!
Share A Memory
Send Flowers