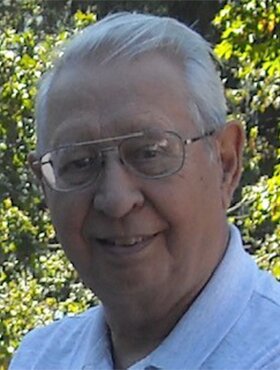 Martin Meyer, beloved husband of Bernadette (Nadean) Meyer, of Calgary, AB, passed away peacefully on Wednesday, January 12, 2022, at the age of 92 years.

Born in Stanmore, AB, Martin lived on the family farm and was the eldest of four children.  He moved to Edmonton to attend Seminary College and later to study accounting.  Martin graduated from the University of Calgary in 1957 in Accounting. He then began his successful career as a Chartered Accountant.  Martin worked for various accounting firms until he landed a job at Standard Hospital Supply LTD where he was the Chief Chartered Accountant.  Later, he started his own firm, called Meyer and Campbell Chartered Accountants.

Calgary is where he met the love of his life, Nadean.  They married in 1956 and had four children.  First and foremost, Martin was a family man.  He was a dedicated father and a powerful role model.  Martin worked hard, especially during tax time, but always found time for his family. He coached soccer and become a Scout Leader so he could spend more time with his boys.  Martin was also a sports fan, following the Calgary Flames and even worked at the McMahon Stadium so he could watch the Stampeders.  He loved to camp, travel and work in his garden where he spent a lot of his time growing raspberries, potatoes, and other vegetables.  Martin was a Charter Member of the Calgary Winter Club where he was an avid bowler and curler.

Martin was a key volunteer for Canadian Martyrs Parish (CMP) and did everything from accounting to running the Eucharistic Ministers to being an usher.  Martin joined the Knights of Columbus at Canadian Martyrs Parish where he was the treasurer and volunteered for many events like organizing and collecting of the recycling bottles and cans to support CMP and the Knights.  He spent many hours helping the Franciscans at the Mount Saint Francis Retreat Center with their accounting.

A sincere thank you to the staff at the Foothills Hospital Emergency and Unit 36 whose dedication and compassion are most appreciated. Those who wish to make contributions in Martin’s memory may donate to the Alzheimer’s Society of Calgary.

Prayers and Tributes for both Nadean and Martin Meyer will be held at McInnis & Holloway (Chapel of The Bells, 2720 Centre Street North, Calgary, AB) on Thursday, May 26, 2022, at 6:30 p.m.  Family and friends who are unable to attend in person are invited to join Martin’s service streamed live (see below) on the day of the service. For those who are unable to view live, a recording of the service will be posted. A gathering will take place immediately following.

A Funeral Mass will be celebrated for both Nadean and Martin Meyer at Canadian Martyrs Catholic Church (835 Northmount Drive N.W., Calgary, AB) on Friday, May 27, 2022, at 11:00 a.m. For those who are unable to attend a recording of the Prayer service and Funeral Mass will be posted below. Condolences, memories and photos can also be shared and viewed here.

In living memory of Martin Meyer, a tree will be planted in the Ann & Sandy Cross Conservation Area by McInnis & Holloway Funeral Homes, Chapel of the Bells.

Share Your Memory of
Martin
Upload Your Memory View All Memories
Be the first to upload a memory!
Share A Memory