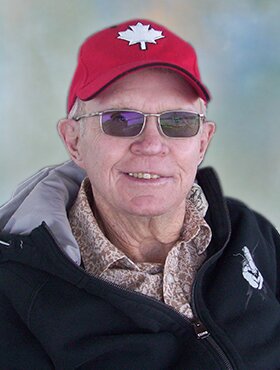 Ralph passed away unexpectedly in Calgary with his family by his side. Born in Montreal, Ralph was one of four siblings, he was predeceased by his eldest sister, Maureen. Ralph will be deeply missed by his wife of 51 years Kathy, his daughter Carolyn, his older brother Gary, and younger sister, Colleen, and long-time best friend Warren.

Ralph grew up in Winnipeg, playing baseball and fishing with his friends. He completed high school and began an apprenticeship as a Steam Engineer where he worked in the oil industry in Quebec, Ontario and Alberta. In his later years, he worked at Alberta Distillery in Calgary until retirement. This sparked his interest in making different alcohols and wine.

During his career, Ralph tried to find the right work/life balance so he could pursue his interests. He loved the outdoors, enjoyed downhill skiing, snowshoeing, bowling, golf, and bike riding. He was a big fan of hot tubs and believed a long soak was the cure for any ailment. Ralph looked forward to each new adventure and enjoyed the fun and comradery of his family and friends. He explored many new places and sometimes he could be a bit of a joker, asking family and friends to pose in front of every silly thing just to take a picture. He loved nature and the great outdoors and if there was some sort of activity to participate in at the same time, he was “all in”.

Ralph enjoyed being a member of a number of ski clubs over the years, visiting resorts all across Canada and the United States with his wife Kathy. As an avid skier Ralph looked forward to each and every run and could sometimes ham it up showing off a trick he knew as he glided past friends and family calling out “Hey slowpokes.”

In the early years, the young Edwards’ family of three would travel across Canada in their little tent trailer visiting family and friends along the way. Ralph especially enjoyed visiting Fairmont Hot Springs in BC where the family spent decades vacationing. The family would spend winters skiing and summers golfing at their timeshare there.

Over the years, Ralph enjoyed making his own wine and liquors and often shared the fruits of his labours with friends and family. When his daughter, Carolyn was of age the family travelled to BC and visited the wineries of the Okanagan Valley where he entertained family sharing his wisdom of wine facts.

Ralph was known to volunteer within in his own community doing small repairs, landscaping jobs and even hosting driveway happy hours for his neighbors close by. After his daughter joined the Canadian Armed Forces, Ralph regularly volunteered at the Military Family Resource Centre, working at their kiosk at local trade shows, assisting at their stampede breakfasts and supporting the MFRC on their ski trips.

He was known for making meticulous notes and kept copies of everything that he thought was important, even if it was map of Montreal from 1969. He liked to be organized and on time. If you weren’t early, you were late, according to Ralph.

Ralph really enjoyed the planning of each trip, so much so that to him it was almost as much fun as the trip itself. After retirement he and Kathy would embark on several cruises each year, travelling the world together. He was fortunate enough to have seen many beautiful places around world in his 77 years. Ralph was stubborn and sometimes a bit rough around the edges. He showed his love by generous acts of kindness like giving a bottle of his wine to a neighbour, washing his wife’s car, or engraving his daughter’s bike with her license number. He wasn’t a fan of everyone but if he liked you, he would be your loyal friend for life. Ralph left a mark on all those fortunate enough to know him. He lived a great life filled with good times, countless memories and shared laughter with loved ones.

A Celebration of Life will be held at The 88 Lounge, Canada Olympic Park (88 Canada Olympic Rd SW 2nd Floor, Calgary, AB) on Thursday, April 28, 2022 from 3:00 p.m. to 10:00 p.m. If interested in attending please RSVP with the family by email at celebrateralph44@gmail.com. Condolences, memories, and photos may be shared and viewed here.

Share Your Memory of
Ralph
Upload Your Memory View All Memories
Be the first to upload a memory!
Share A Memory
Send Flowers