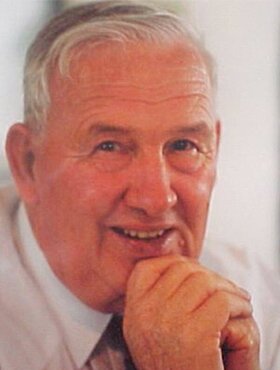 Stephen “Steve” Gordon Makuk, beloved husband of Mary Anne Makuk of Calgary, AB, passed away on Sunday, April 10, 2022 at the age of 98 years.

Steve was born March 1, 1924 in the hamlet of Michel, British Columbia and was the youngest of six children.

Steve’s father was Ignatius “Ignace” Makuch, and his mother was Maria Grilus. Ignace immigrated in 1903; the two met in Canada and then wed in 1908 at Fernie, BC. Steve’s parents both originated from a small village called Nizna nad Oravu, which is presently in the country of Slovakia. His parents had emigrated from Europe in search of work, and similar to many, settled in the coal mining areas of BC and Alberta. Ignace was killed in a mining accident in 1941; his mother passed away a short few years later in 1944. Economically, times were very difficult, which impacted and shaped Steve’s outlook his entire life. Steve was forever grateful for the family bonds and assistance which his sisters, and his niece Mary Urbash, provided to help them get them through tough times.

Steve married Mary in 1951 in Napaneee, Ontario. To state simply that she was the love of his life would be an understatement. They were happily married for 71 years—an accomplishment very few will ever achieve. Together, they raised three children: Maureen Patricia Haggarty, John Stephen Makuk and Patrick James Makuk.

At eighteen years of age, Steve was dropped off in Vancouver and was given “all of Canada in which to make his fortune”. He initially became a plumber and a pipe fitter, didn’t care for the profession, so he then became a welder. This became his trade for the remainder of his life. With his growing family, they crisscrossed Canada in search of work. He worked on many projects in many places ranging from shipbuilding in Vancouver, to the subway in Toronto, to oil and gas facilities, to remote locations in places such as Dawson Creek. He finally settled in Pincher Creek and contracted to the Shell gas plant. Being well respected, Steve was offered promotions which would have required him to travel the world supervising construction projects but declined the offers when he realized the negative impact that it could potential have on his family. After Pincher Creek, Steve and family moved to Calgary, where he lived the rest of his life.

Aside from work, Steve had at least four distinct and notable characteristics. Firstly, and perhaps foremost, was a love of family—both immediate and extended family. As mentioned above, career was not more than an afterthought if it impacted negatively on the upbringing of his family.

His second attribute involved living a life as a devout Roman Catholic. The Church guided his outlook, it became his adopted moral compass in all aspects of life. It provided the parameters on how he approached each and every day and how he interacted with everyone he met. To use a colloquialism, Steve would give you the shirt off his back; in reality, he literally gave away vehicles to relatives in need. He retired early in life, when he “had enough to get by”, rather than pursuing extraneous wealth creation. He also had a deep devotion to the Blessed Lady, and many of his travels combined with his religious beliefs. This led them to far-off places such as Israel, Medjugorje, Fatima, and the Philippines.

Thirdly, was a love of travel. Initially his entire family—and later Steve and Mary—always travelled extensively. In their early years, travel rarely entailed luxury, but despite limited finances, at every possible opportunity the family was carted around North America; often passing on hotels and restaurants in favour of less expensive “camp-outs”. A line many of us recall hearing more than once was “eighteen dollars for a hotel room for the night? I only want to rent it, not buy it”. In latter years, Steve and Mary travelled the world, developed a love for cruising, and have seen more of the world than most people would ever dream of doing.

Lastly, was a love of music. Anyone who knew Steve, knew that he played a “mean” harmonica. The amazing thing about his music was that it was self-taught and played by ear solely. No gathering was ever complete without Steve entertaining with his harmonica.

Steve is survived by his 98 year old wife Mary, his children Maureen (Terry Haggarty), John (Terryl) and Patrick (who always had a special place in his heart); his Haggarty grandchildren Ryan, Colin, Meghan, Michael, and his Makuk grandchildren Graham (Rochelle), Brian and Kira; and his great-grandchildren, Emilia and Abigail Makuk. His older siblings, all predeceased, included sisters Anna, Mary, Theresa, and brothers Joseph and John.

Steve’s funeral mass will be held at St. Luke’s Catholic Church (1566 Northmount Dr. NW Calgary, AB) on Wednesday April 20, 2022 at 11:00 am. Due to Covid, there will not be a reception following the funeral. Condolences, memories, and photos can also be shared and viewed here.