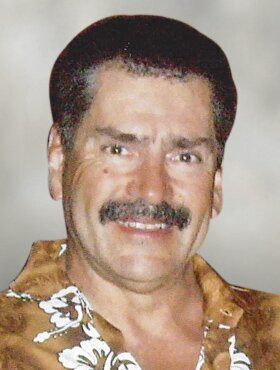 Douglas Roy Veness, better known as Doug, was born in Kingston, ON, on a brisk January 3rd in 1957. He moved to an even colder Winnipeg, MB, in 1965 with his parents, Roy and Margaret Veness, four brothers Ken, Philip, Glen and Alan, and his two sisters, Nancy and Cori.

In 1971, the family moved to Flin Flon, MB, where Doug worked at his father’s car dealership, where he became a painter at the tender age of 16. Doug would carry on painting motor vehicles for the rest of his days, finally dedicating his skill to Harley-Davidsons in early 2000.

Doug moved to Calgary in 1978 and had his son, Ryan Veness, with his soon to be wife, Tina Montgomery, in 1979. They were married in the summer of 1980. Soon after, the two young lovers parted ways, however Doug decided he would raise his son on his own. Throughout the years, he would volunteer with Ryan's schools and the Calgary Boys & Girls club to ensure he spent the most time possible with his son.

In 1991, Doug met Lori Everston and his family of two became a family of five, adding Lori's two children, Tammy and Nathan Labbossier to the mix. The two love birds would get married in 2000 and adopted their grandson Aydin in 2011, raising him as their own from then on. Lori passed in 2012 and Doug once again found himself as a single parent raising a son.

Family and *friends (*just another word for "family" to him) would come to know him as a generous and kind man, always there to help. People gravitated to him and his love for teaching children was well known. The proverbial "Best Friend", he always had time to play and interact with the children in his life. Like his own children, whether it be by blood, marriage, or adoption, most came to count on him for his patience and nurturing ways. Always there with a pragmatic outlook and guiding words "yard by yard, life is hard... inch by inch, life's a cinch." he is quoted. Just one of his many positive affirmations.

Doug accomplished much throughout his life and was particularly proud of the people he met and the connections he made. Although if you ask anyone around him, they were mostly proud of his creativity and generosity, as he always was crafting something new and giving it away. Some of his favorite hobbies were stained glass and adding a coat of paint to almost anything and everything, bringing a lot more brightness to this world.

One of his favorite memories was a trip he took with his son Ryan to Machu Picchu, Peru, where they trekked through the jungle of the sacred valley for seven days before reaching the Mystic site. They spent two days exploring and reveling in the awe and wonder of the ancient village.

As many know, Doug's favorite pastime was running. If you didn't catch him painting, you couldn't catch him running. He had entered and placed in mini-marathons, marathons, and triathlons up until the ripe old age of 65. Along with running he was an avid curler and joined his brother Glen's curling team and together they shared a love for the sport.

Besides his loving wife Lori, Douglas was predeceased by his mother Margaret Veness, stepmother Marie Veness, and father Roy Veness.

A Celebration of Doug’s Life will be held at his home in Beddington in Calgary AB, within a few weeks. It will be a whole weekend of coming and going and sharing tales of the "Big Man" himself. It will be super casual, and please bring your loved ones! Dates will be announced ASAP on Facebook, so please keep a look out and share when you can.

In living memory of Doug Veness, a tree will be planted in the Ann & Sandy Cross Conservation Area (Township Rd 220A, Priddis, AB T0L 1W0) by McInnis & Holloway Funeral Homes, Chapel of the Bells, 2720 Centre Street North, Calgary, AB T2E 2V6, Telephone: 403-243-8200. Google for directions and prepare to go for a hike, as it's a beautiful area to explore with Doug.

Share Your Memory of
Doug
Upload Your Memory View All Memories
Be the first to upload a memory!
Share A Memory
Send Flowers