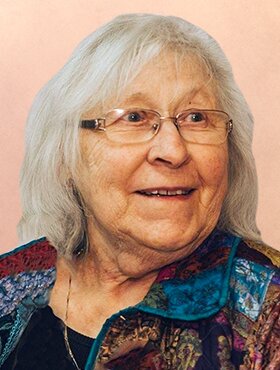 Irma was born in Lethbridge, AB, and grew up on a farm near Bashaw, AB. She was the adopted daughter of Emil and Lydia Schultz. Irma married Gail Bush in 1958 and moved with him onto an acreage south of Nampa, AB, where she raised her four boys, gardened, and grew flowers. She had a milk cow and poultry for many years that provided delicious home-cooked meals. She was also skilled at many handicrafts, including sewing, and knitting. When her husband Gail passed in 2005, Irma moved to an apartment in Calgary, AB, but continued to keep busy sewing and knitting for family members. She was also an avid reader.

Irma was predeceased by her husband Gail in 2005, and her son, Greg, in 2001. She is survived by her three sons and two daughters-in-law, Keith and Esper Bush, Randy and Geraldine Bush, and Tim Bush, as well as many grandchildren, and great-grandchildren. Condolences, memories, and photos can also be shared and viewed here.

Share Your Memory of
Irma
Upload Your Memory View All Memories
Be the first to upload a memory!
Share A Memory
Send Flowers