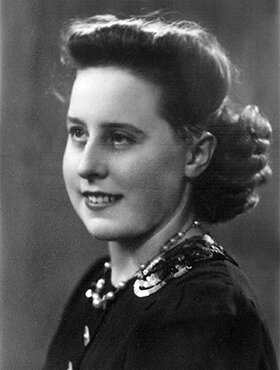 Gladys Stanway, beloved mother, grandmother and great-grandmother, passed away in Calgary, AB, on Wednesday, April 20, 2022 at the age of 95 years.

Gladys was born in Manchester, England, growing up during the Great Depression. Her education was cut short at the age of 13 with the outbreak of war, and after learning typing and shorthand she found work as an administrative assistant at a large mail-order company. An only child, as a 14 and 15-year-old she endured much of the war's nighttime bombing on her own – her father, Sam, away serving overseas and her mother, Mary, working night shifts in a munitions factory. She assured her mother she always retreated to the backyard bomb shelter during raids, but later admitted she was more afraid of the spiders in the shelter than she was of the bombing and usually stayed in her own bed with the company of her dog, Pat. It was typical of the resilience and determination she would demonstrate throughout her life.

In 1946 Gladys met the love of her life, Bill Stanway, and they were married a year later in Manchester. In 1950 the couple had a son, Paul, and with housing and jobs in short supply in Manchester the family moved to Stafford in the English West Midlands. Gladys spent 35 happy years in Stafford, many of them working as a book-keeper at an agricultural supply company, but as she often said she was always a 'Mancunian' at heart and loved her many visits to her hometown.

On retirement Gladys and Bill moved to Alberta to be closer to Paul, his wife Rene and grandchildren Scott and Nicole. Bill passed away in 2000 in Edmonton, and in 2014 Gladys joined her family, now including great-grandchildren, in Calgary. She loved the regular family dinners and celebrations, which in the past couple of years were sadly interrupted by the pandemic. Determined and capable, Gladys lived independently until the last ten days of her life, before a short illness claimed her.

In accordance with her wishes, a private family celebration of her life will be held and Gladys's ashes will be returned to Stafford, England, to be reunited with those of her mother.

On behalf of our Nana, the family would like to offer their grateful thanks to the staff of the Manor Village, Rocky Ridge, for their support and friendship over the years, and to the staff on Units 46 /47 of the Foothills Medical Centre for their loving care.

In living memory of Gladys Stanway, a tree will be planted in the Ann and Sandy Cross Conservation area by McInnis and Holloway Funeral Homes, Crowfoot, 82 Crowfoot Circle NW, Calgary, AB T3G 2T3.