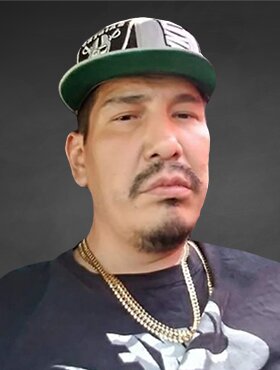 It is with great sadness and heartbreak that we announce the sudden passing of Monty Dodginghorse, beloved husband of Alberta Otter of Tsuu t’ina Nation, AB, on Wednesday, April 20, 2022 at the age of 41 years.

Monty was born in Calgary, Alberta on February 14, 1981 and raised on Tsuu t’ina Nation where he resided until his passing.

Family and friends will remember Monty for his kindness, gentle heart and soul, his crazy infectious laugh and sense of humour. Monty attended school in Calgary.  He played hockey and baseball with Calgary Southfour Association in his younger years. Monty was a gifted athlete in his younger days, playing hockey, softball and rodeo, riding steers. Monty was not afraid of anything, always laughing and joking and making light of any situation he faced while making friends wherever he went. In recent years he was employed part time with Starlight Construction. Monty was an accomplished carpenter, following his late father’s footsteps. Ranching was a way of life he cherished working with his cousins and uncle Jessie Starlight. Also his special uncle Marvin Dodginghorse, whom he loved and admired. Monty operated heavy equipment and practiced singing with the Chiniki Lake Drum Group. Monty loved dirt biking with a passion. Monty lived life to the fullest everyday. Always happy to see his friends, relatives and especially his little hound dogs, Puffy, Bear and Nugget. Monty’s main love were his children, he was always devoted to them.

Besides his wife Alberta, Monty is survived by his children, Corbin, Kyra, Serenity, Shari Anne, Emily, Eileen, Monty Jr., Faye, and Lewis. He is also survived by his mother Frieda Dodginghorse, his brother Dale as well as his many aunts, uncles, cousins and numerous other relatives and friends too numerous to mention. We wish to acknowledge and recognize everyone in his life that he had unconditional love for and a special thank you to Khalid, his taxi driver.

Share Your Memory of
Monty
Upload Your Memory View All Memories
Be the first to upload a memory!
Share A Memory
Send Flowers