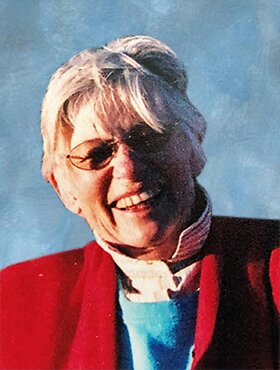 It is with heavy hearts that we announce the passing of MajBritt Paulina Slotboom of Calgary, AB. She passed away on Thursday, April 21, 2022, at the age of 85 years.

MajBritt was born in Finland on May 27, 1936, and grew up on a farm near Soleftea, Sweden. She met Robert Slotboom, a young Dutch engineer who just graduated university and was touring Europe on a moped, at Skansen in Stockholm (an open-air museum) where they danced until shutting the place down that night - and both of them knew that day in this chance meeting, they had met their soul mates. In 1956, MajBritt and Robert married, which meant moving to Holland. In Holland, Sig was born. After a few years in Holland, they decided to move to Venezuela, where Lisette and Robin were born. In the late 1960's the promise of Canada proved alluring and they immigrated, and Canada would become their permanent home, setting up in Calgary, where Tony was born.

From an early age, MajBritt had a love of learning new things. She was a natural linguist and was fluent in at least four languages. After coming to Canada, she pursued night school at first, this led to post-secondary education, all the while being a Mother to four kids, and eventually earned her B.A. in English, graduating in the same year as her oldest son with his degree.

MajBritt was an avid reader her whole life and loved to share her love of stories. This led to her career as a librarian with the Calgary Public Library at both the downtown main branch and at the Calhoun branch - a job she loved until her retirement.

Knitting - and really, all things yarn related - were a huge part of MajBritt's life, and her passion for knitting was immeasurable. If you knew MajBritt, odds were pretty good you had several knitted hats, many pairs of beautifully handcrafted mittens, or sweaters, or scarfs - or just about anything else you could imagine that could be made from wool. She was a lifelong member of the Gilli-Hook Heritage Knitters Guild and cherished spending time with her knitting buddies at various retreats in the mountains. Her house is littered with sheep paraphenelia decorating every nook and cranny.

Her time in the tropics inspired an interest in plants and gardening and her "green thumb" led to a house full of lush green plants becoming an indoor jungle. Both MajBritt and Robert loved classical music (the radio was always set to classical music at their house) which they gifted onto their children as well.

Travel was also a big part of both MajBritt's and Robert's interests, in particular with visiting Lisette and her family in Australia.

The mountains and the outdoors held special meaning to MajBritt and in keeping with her Nordic background she would often be found on a set of cross-country skis in the winter, or on a hike in the summer months, walking stick in hand.

MajBritt was amazingly thoughtful and usually expressed her appreciation for others in creative and unique ways. Her presence touched the lives of many. People often call out her positive energy when thinking of her. She could fearlessly express her opinions, especially championing an underdog in any particular context. Lastly, she was fiercely proud of her nine grandchildren.

MajBritt was predeceased by her husband Robert, and her brother-in-law Ruut. She is survived by her four children and their families, and other family around the world.

A Celebration of MajBritt’s Life will be held at McInnis & Holloway (Park Memorial, 5008 Elbow Drive SW, Calgary, AB) on Saturday, May 14, 2022 at 10:00 a.m., where we invite everyone to share their memories (or their favourite "MajBritt yarns"). Condolences, memories, and photos can also be shared and viewed here. If desired and in keeping with MajBritt's philosophy to always help others, in lieu of flowers, she would be honoured with any donations made to the Calgary Humane Society, or to any charity of your choosing.

MajBritt's family would like to express gratitude to her medical care teams, and in particular Dr. Dean Ruether at the Tom Baker Cancer Centre and Dr. Stephen Duncan at the Foothills Medical Centre, and her palliative home care team, for going over and above with their guidance and compassionate demeanors while taking care of MajBritt.

Share Your Memory of
Majbritt
Upload Your Memory View All Memories
Be the first to upload a memory!
Share A Memory
Send Flowers