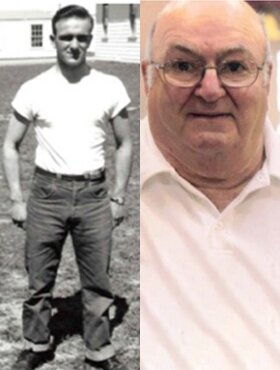 Rudy was born in Trail, BC on Oct. 22, 1934. Rudy was the 3rd boy of an Italian immigrant family. His father moved the family to Red Mountain, in Rossland to farm in 1941. Rudy spent his days working the farm & attending high school. Rudy graduated from Rossland Secondary High where he learned to play tuba.

After graduating in 1951 Rudy Joined the RCAF, he was sent to Gagetown, NS for basic training, then on to Winnipeg, MB. to train as air frame mechanic. In Winnipeg he started to make his lifelong friendships. Once Rudy completed his training, he was then transferred to Claresholm, AB. This is where he met and fell in love with a nursing graduate at an RCAF dance (Mary Werre). The two were married and move to Calgary to start their family.

Together they built their new home in Acadia. Rudy and his wife Mary (Rozella) raised 5 children, 4 girls & 1 boy, in this loving home and neighbourhood. Rudy left the airforce and worked in many industries in Calgary. Settling in at the Catholic school board. Rudy, had a lifelong career with them, until retiring in 1995.

Rudy & (Mary) Rozella were the most welcoming people in Acadia, they were the first family on the street. Everyone who moved to this neighbourhood were welcomed & accepted, as family. By Rudy’s (Dad’s) infectious laughter, Rozella’s (Mary’s) Mom’s hospitality & their loving spirit.

Rudy (Dad & Mom) spent their lifetime lovingly raising their 5 kids. Dad cherished them all dearly. He taught them to love, laugh and enjoy the company of family time. Before long, they had 4 sons & 1 daughter-in-law. Rudy (Dad) welcomed every one of their children’s spouses with open loving arms. Their children’s choices for partners were also Rudy’s choices as best buddies. Rudy was most proud of his children & grandchildren. Encouraging us all to reach for our dreams. Rudy (Dad) always enjoyed family get togethers. He & mom would host our ever-growing family to yearly special events. Rudy (Dad) was the most welcoming at these events. He held them close to his heart and was excited for the next one.

Rudy is survived by his older brother Mernie, and his younger sister Antonette Hacket, of BC. his cousin Oddo & Maria Torresan of ON, Canada, and his many cousins in, San Zenone deli Ezzelini, Italy.

A Memorial & Celebration of life to follow at a later date. Condolences, memories, and photos may be shared and viewed here.

Share Your Memory of
Rudolfo
Upload Your Memory View All Memories
Be the first to upload a memory!
Share A Memory
Send Flowers