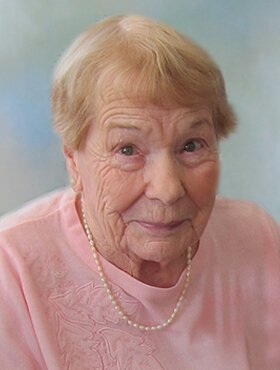 Joan Ulley (Senior) of Didsbury, AB, passed away on Saturday, April 23, 2022 at the age of 101 years and will be sadly missed by family and friends.

Joan was born in Montreal, QC, on March 8, 1921, the oldest and only girl with three brothers, Frank, Allan, and Russell. She married Milton, the love of her life in 1943 and they settled and raised their two children in Otterburn Park, QC. When Milton retired, they moved to Courtenay, BC, in the 1980s to be with their son’s family. After Milton’s passing, Joan then moved to Calgary, AB, in 2006 to be with her daughter’s family.

Joan accomplished much through her life and was particularly proud of reaching her Life master in Bridge. She had an extraordinary memory for cards which allowed her to travel to many bridge tournaments and extended trips around North America. She loved to play any card games to whoever was up for the challenge and competition.

Joan had a passion for reading and in her last few years when it became too difficult to retain what she was reading, she would read street signs, or closed captions on TV or whatever was at hand to keep her mind sharp. When her children and grandchildren were young, she would read to them as well.

She loved to garden and had a flair for redecorating. If ever you went to Joan’s house, you could always find something new or moved around which was always done tastefully and which she took great pride in.

She will be most remembered for the love of her family and friends. Joan took interest in people and listening to stories of their lives.

She had compassion and a wonderful sense of humor. Her friendly face and conversations will be sadly missed by all.

Joan is survived by her daughter and son-in-law, Susan Wells (Keith); grandsons, Kristopher Ulley, Dale Wells (Allison), Dallas Wells (Jenn); and great-grandsons, Oliver and Jude Wells. She will also be missed by her special companion, Marty Martin, and his family.

Joan was predeceased by her husband Milton Ulley in 1993 and son Warren Ulley in 2008, along with her three brothers, Frank, Allan, and Russell Senior.

A Celebration of Joan’s Life will be held at a future date.