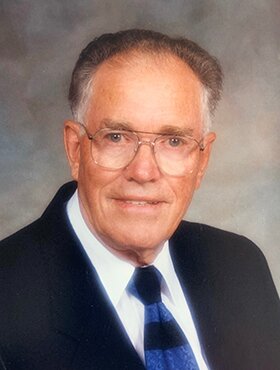 Jim was born in Bentley, Alberta Canada on July 31, 1926. In 1939 he moved to Cochrane to begin working full time.  Later, Jim moved to Pincher Creek to work at the Shell Gas Plant in Waterton.  It was there he spent many years with his wife Lorraine and where they raised their five children.  Sadly, Lorraine passed away in 1969 at which time Jim returned to Cochrane to continue raising his family.

Transferring from the Waterton Gas Plant Jim continued work in the oil and gas industry being stationed at Shell Canada’s plant west of Cochrane.  To complete his working career in oil and gas Jim finally transferred to the Cochrane Extraction Plant

Jim married Margie on December 4th, 1970. Throughout their 52 years of marriage, both developed passions for various hobbies and activities which included extensive traveling with friends and family. The building of bird houses was one of Jim’s most favorite pastimes and one that he was incredibly skilled at. To this day, many of his creations reside in people’s homes around the world.

James was predeceased by his first wife Lorraine in 1969 and his daughter Deanna in 2013.

A Funeral Service will be held on May 7, 2022, at 1:00 p.m. at the Cochrane Alliance Church, ( 902 Glenbow Dr, Cochrane, AB). Refreshments to follow the service. Family and friends who are unable to attend in person are invited to join Mr. Houghton’s service streamed live on the day of the service at https://tv.cochranealliance.com/en/c/in-loving-memory-james-jim-houghton.4517 . For those who are unable to view live, a recording of the service will be posted. Condolences, memories, and photos may also be shared and viewed there. In lieu of flowers, the family prefers donations to be made to the Canadian Cancer Society in Jim’s honor.