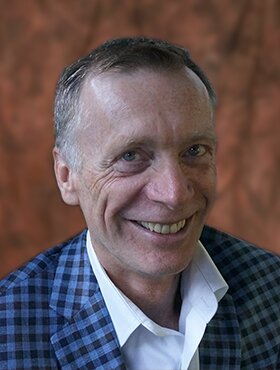 Paul Taylor Bates, beloved husband of Sheena Bates (nee Fennerty) of Calgary, AB, passed away on Tuesday, April 26, 2022 at the age of 64 years.

Paul was born in Sale, Cheshire, England on July 17, 1957. He lived with his family in England and Scotland before immigrating to Canada in 1967. He grew up in Newmarket, Ontario and made some lifelong friendships. He met Sheena at the University of Waterloo in 1978, and they were married the following year, much to the chagrin of Sheena’s father, who thought that they were much too young!

After graduating in 1980 they moved to Calgary, and enjoyed making new friends and spending time in the mountains. Then it was on to the University of Saskatchewan, where Paul was an instructor and together he and Sheena worked on the Norman Wells Pipeline Project, which allowed them to tour and learn about the western Arctic. Paul and Sheena then moved north to Baker Lake, now part of Nunavut, and enjoyed their time there living within an Inuit community. Gavin joined the family in 1985. The next move was Yellowknife for a few years, where Kirsten was born in 1988. Paul was offered the job of Town Planner in Canmore, so they moved south for 5 years, thoroughly enjoying life in another small town, in the beautiful mountains. The private sector looked inviting, so off to Courtenay/Comox for a few years, where Paul worked for Mt Washington Ski Resort. Then back to Calgary, where Paul spent many years working for Skiing Louise and Resorts of the Canadian Rockies.

Paul was a proud Rotarian, and spent time in the Rotary clubs of Canmore, Comox and Calgary, working on a wide range of committees. He was most pleased of the efforts he and the team made to ship medical supplies and other donations to Africa, and working on the annual Stampede BBQ, as part of the dishwashing crew. The family all helped out and tried not to complain too much about their hands and late nights!

Paul led the family on many adventures, and together they learned how to face new challenges and appreciate the good in each place that they lived, and in the people that they met. He was the first one in the family to learn to snowboard, and taught the others. Then the parents had to get used to the kids surpassing them in skill in very quick time. This also happened with mountain biking!

Paul was most proud of his children, Gavin and Kirsten, and so enjoyed being with them as they grew up into the strong, loving supportive people that they have become. He loved them very much. He was a wonderful husband, father and grandfather, and will be missed so very much.

Favourite hobbies included playing tennis as a youngster, mountain biking, cross country skiing and snowboarding, and running – he managed to get Sheena to complete 4 marathons with him. The kids were involved in these activities too, although their enthusiasm for hiking as teens was somewhat less than their parents’! Paul and family have been fortunate to have some wonderful friends over the years, enjoying trips and other times together, and especially in these latter years, to feel supported and well-loved.

In recent years Paul was an original member of the YouQuest group, and the past few months were spent with the loving staff and family at 3N, Bethany Riverview. The family is very thankful for all the compassion and love provided by Chris, Stephanie, Dr Ryan and the rest of the wonderful staff.

Paul was predeceased by his mother Elizabeth, father Sidney, and sister Carolyn.

At Paul’s request there will be no funeral. A Celebration of Life will be held when family and friends are once again able to travel freely. Condolences, memories, and photos may be shared and viewed here. If anyone so desires, donations may be made directly to the Alzheimer Society of Calgary, 800, 7015 Macleod Trail S.W., Calgary, AB T2H 2K6, Telephone: (403)290-0110, www.alzheimercalgary.com