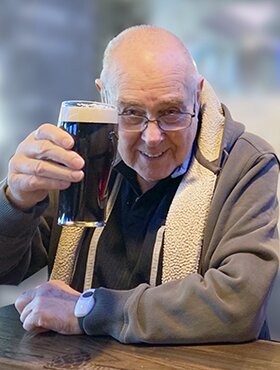 Albert Fountain of Calgary, AB, sadly passed away on Friday, April 29, 2022, at the age of 80 years. He is survived by his beloved wife Pauline and their sons, Stephen and Mark (Andrew Walker); daughter-in-law Sharon; grandsons, Jack, and Nicholas; great-grandchildren, Skye, Harley, and Ruby; and his siblings, Evelyn, Roger, Graham, and Penny.

Albert, the 2nd of five children blessed to Nora and Albert (Nobby), they grew up in St. Albans, Hertfordshire, UK.

When Albert left school at 15, he started his career as a car mechanic, progressing to a truck driver. Albert commented many times over the years of his love for his yellow Foden truck that carried him many miles from Hertfordshire to the North of England.

In 1962, while on holiday in Yarmouth with his friend Vic, he met the love of his life, Pauline. The story goes that as he was walking past an alleyway, Pauline grabbed him and said “you’re mine!” The rest they say is history.

Albert continued his weekly trips while Pauline looked after their boys. Albert yearned to be home nightly with his family and so Albert started a career at London Country Buses. There he found his true vocation as a bus driver (Bertie the bus driver). His career choice opened up a whole new world. Albert met so many lifetime friends and touched so many more lives during his time on the buses. In 1987, Albert and 11 friends started Welwyn and Hatfield Line, their very own bus company. Albert was heartbroken when it was sold a number of years after. He continued driving buses until he retired in 2006.

Albert and Pauline immigrated to Calgary, Canada in 2008, to be close to his son Mark and grandson Nicholas. Albert discovered he had a new talent as an artist. He attended weekly art classes every Friday with the Bow West Artists group which he loved. Albert was very proud of his paintings. Every year at their art show, the artists would display and sell their work. Albert would put sold signs on all his work so he could keep them! He loved his work so much and could not part with them.

Albert and Pauline lived in Silver Springs Community, and he loved his garage where he could spend hours pottering around and admiring his “just in case” tools! They made many friends and touched so many lives in the years on 78th St.

Due to Health issues, they moved to Holy Cross Manor where Albert became very popular and quickly made friends and again touched so many more lives. He was so proud of his scooter (Harley/Hog). Albert was only concerned with Pauline’s well-being and ensured she would be taken care of in case he was unable to.

Although he will be missed dearly, we rejoice in the abundance of wonderful memories we have been blessed to make with Albert.

A Funeral Service will be held, on Monday, May 9, 2022, at 2:00 p.m. (MST) or 9:00 p.m. (BST). Family and friends who are unable to attend in person are invited to join Mr. Fountain’s service streamed live (see below) on the day of the service. For those who are unable to view live, a recording of the service will be posted. Condolences, memories and photos can also be shared and viewed here.

Albert's Memorial Card can be viewed by clicking here

Share Your Memory of
Albert
Upload Your Memory View All Memories
Be the first to upload a memory!
Share A Memory
Send Flowers