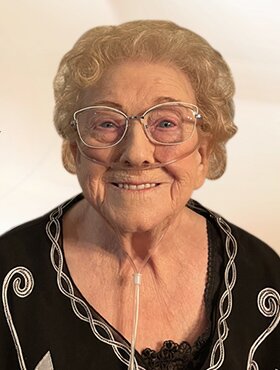 It is with great sadness that we announce the passing of Doreen (Sheila) Elwood, beloved wife, mother, grandmother and great-grandmother.  Sheila passed away in Calgary, AB on Saturday, April 30, 2022, at the age of 87 years.

Sheila was born in Belfast, Northern Ireland and was happily married to David for 62 years.  In 1976 they immigrated to Calgary with their three children. In Belfast, Sheila worked for an advertising agency.  After coming to Calgary, she worked as an admin assistant at a winery and later in her career she spent some time as realtor.  Although Sheila enjoyed working her favourite role was after retirement when she helped to care for her grandchildren. One of her fondest memories is the summers her and David spent at their trailer in Fairmont Hot Springs with Rhys and Madison.

Sheila was an avid (and exceptional baker), following in her mother’s footsteps.  She also enjoyed sewing and after retirement her and David were fortunate enough to enjoy many trips to various parts of the world.

Besides her loving husband, David, Sheila is survived by her two daughters, Kim (Ken) and Nicola (Jim), her son Neil; her four grandchildren, Lisa (Jay), Michael, Kyle (Bri), and Rhys; and her two great-grandchildren Madison and Logan; all of Calgary, AB.

Sheila was predeceased by parents James and Catherine, and her brother Mervyn all of Belfast, Northern Ireland.

Funeral Services will be held at McInnis & Holloway (Fish Creek, 14441 Bannister Road SE, Calgary, AB) on Thursday May 12, 2022, at 2:00 pm. Reception to follow in the Hospitality Centre at the Funeral Home. Condolences, memories, and photos may be shared and viewed here. In lieu of flowers the family would appreciate a donation to the Alberta Children’s Hospital, an organization that was important to Sheila, or to any charity of your choosing.