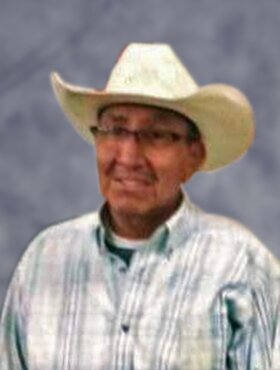 Arthur Doyle Wildman, was called home by our Creator on Monday, May 2, 2022 at the age of 62 years, while surrounded by his family.

Arthur was raised in his earlier years traditionally by his grandparents, Harrison and Becky Powderface. This traditional teaching was enhanced by teachings by his stepdad Gilford Ear, including hunting, and trapping. Art’s love for horses was enriched by his dad Bert with ranching and raising cattle.

Art started work at an early age in the Agricultural Industry, as a ranch hand volunteer at Star Ranch with his uncle, the late Sykes Powderface. Over the years with his hard work and experience, he ended up managing the Star Ranch. He learned and applied the teachings of managing a successful ranch.

Art enjoyed being around horses, he loved to go horseback riding at every opportunity. As a rodeo competitor he entered team roping with his late brother Gilbert, where they won several championships. He was an all-around cowboy as competition led him to ride Saddlebronc and Bareback.  He qualified for the INFR with the late Chester Labelle, running for eight years, and he also qualified with Matt Kaquitts in Senior Team Roping and as a Senior Breakaway Roper. His beloved Heeling Horse Jessie was named IRCA’s Heeling horse of the year. Most recently, in 2018 he qualified with Troy Crawler in the Senior Team Roping event.

He was an avid pool player and went to Las Vegas for the World Championships where he won in 2018.

Arthur is survived by his children, Arletha (Garon), Cleavon, Travis, Bertrand (Jessica), Tia, Rory (Helene), Kerry (Jan) Aaryn and Lane; his grandchildren and great-grandchildren; his siblings, Ramona, Margery, Jeanette (Vidal), Lena (Adam) and Daniel; his step-brother Keith; adopted brother Matthew Kaquitts; and by his special nephew Marty (Raquel), and niece Amanda (Troy); and by his special companion Teresa. We apologize if we have missed anyone as he was loved by many.

Arthur was predeceased by his father Bert (Sarah), his mother Ramona (Gilford Ear), his brother Gilbert, Marty, and his sister Iliena,his oldest son Wacey Labelle, and his granddaughter Allison Abraham.

Share Your Memory of
Art
Upload Your Memory View All Memories
Be the first to upload a memory!
Share A Memory
Send Flowers