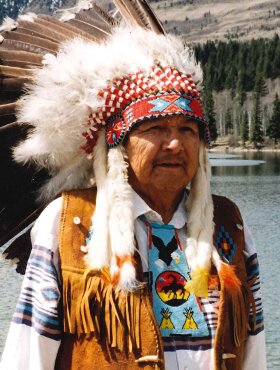 Wally was born in Morley on the 18th of January 1928, to Tom Snow and Cora Bigstoney. Ade’ was a residential school survivor. He married Frances (nee Twoyoungmen) and together they had seven children, Generich, Ronnie, Daryl, Brian, Delphine, Christopher, and Angela.

Ade’ worked in various jobs throughout his life to support his growing family. He started out as a CPP worker, highway construction worker and later became a board member for the Indian Association of Alberta, as well as a board member for Tsuut’ina/Stoney Corrections Society.

In his younger years he worked for the Brewster Touring Company as a guide, as well as operating his own guide outfit called Ghost River Indian Guide Service Wally & Sons. He also worked on farms around the province working on machinery. Later in life he became a councillor for the Wesley Nakoda First Nation, was on the Elders Committee and was a member of the Morley United Church. He also travelled to Sapporo, Japan.

In his retirement years he loved to play Bingo, spending time with his many family members and playing his harmonica. Every Christmas he would play Silent Night on it, which was everybody’s favorite.

The family would like to thank the Canmore Hospital Nurses, the Bethany Cochrane Care Home staff for taking care of Ade’. A special thank you to the liaison worker Kenny House.

Share Your Memory of
Wally
Upload Your Memory View All Memories
Be the first to upload a memory!
Share A Memory
Send Flowers