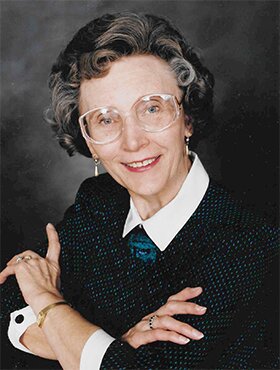 Marie Bondar, beloved wife of Leslie Gabor Bondar, of Calgary, Alberta, passed away on Tuesday, May 3, 2022 at the age of 94 years.

Marie was born in Mátranovák, Hungary on September 6, 1927. She and her beloved mother, Julianna (Julia) Gyorgy, immigrated to Canada in 1932, to join her beloved father, Joseph Gyorgy, a coal miner. Her beloved brother John was born shortly afterward, in 1933. They all settled in East Coulee, in the Drumheller Valley, where she attended school. Marie played the violin and was a beautiful singer. She also enjoyed bicycling and softball. Marie graduated from the Henderson Business School with a secretarial emphasis. She was happy working at Greyhound as a secretary.

Marie married the love of her life, Leslie Bondar, in 1952. She met Leslie through friends at Calvin Hungarian Presbyterian Church. They were both attending an autumn dance where Leslie asked Marie for the last dance of the night. Shortly afterward, Leslie asked Marie on a memorable first date to a movie. While on the bus, Leslie, uncharacteristically, realized he had forgotten his wallet. He insisted on paying, so they traveled to his home to collect his wallet and attended a later movie!

Marie and Leslie had two beloved children, George Leslie Bondar and Leslie John Bondar.  Marie focused on her family, raising her two sons, and then in later years, lovingly caring for and nuturing her grandchildren, and giving them “what for” when they acted up. She enjoyed playing board games, baking, cooking and crocheting.

She was also an active member of the Lorántffy Zsuzsanna women’s group at the Calvin Hungarian Presbyterian Church. She sang in the church choir and she taught Sunday School for many years. At a recent birthday party celebration for Marie at the church, many people were thanking Marie for teaching them in Sunday School.

Funeral Services will be held at the Calvin Hungarian Presbyterian Church (101 14 Avenue SW, Calgary, AB) on Monday, May 9, 2022 at 11:30 a.m. with a lunch reception to follow at the Church. Graveside Service to follow at Rocky View Garden of Peace Cemetery. Condolences, memories, and photos can also be shared and viewed here.

Share Your Memory of
Marie
Upload Your Memory View All Memories
Be the first to upload a memory!
Share A Memory
Send Flowers