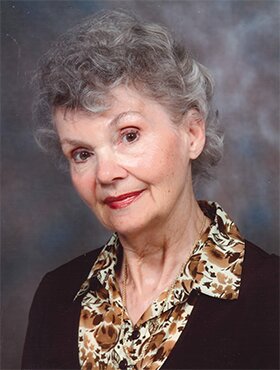 Joan was born in Winnipeg, MB, and was an only child.  She was married in 1961 in Winnipeg, where her first and only child, Suzanne, was born in 1964. Later in 1971, Joan was remarried to William Webb, and they relocated to Kitimat, BC, for a few years and then later moved on to Vernon, BC. Joan was a hard worker who always kept on top of things. She opened a jewellery store in Vernon, followed by a store in Kitimat and in Rocky Mountain House, AB. Joan’s career path changed in the 90’s when she and her husband worked as managers for a retirement residence company. During this time, they managed retirement homes in Calgary, other parts of Canada, as well as all throughout the United States. Joan had a strong Catholic faith and a love for the Lord. Joan has been described by many as being a kind and generous woman, one who enjoyed life, and being with her family.  She also had an eye for fashion and was well-known for her sense of style in clothing. Joan loved to dance to music, and enjoyed travelling all throughout the US, and Europe. Her other interests included camping, reading hard cover books, doing crossword puzzles, watching movies, and playing Scrabble or various card games.  Her favourite place to travel was Maui, but one of her best travel memories was when she went to visit the Vatican to watch Pope John Paul II in an audience.

She will be lovingly remembered by her husband, William, daughter, Suzanne, and granddaughters, Cecily (Ari) and Katarina. She is also survived by a stepdaughter and stepson, as well as cousins in Winnipeg, and extended family members in Austria. Joan was predeceased by her parents, Philip, and Marie Gafka.

Prayers will be held at McInnis & Holloway (Fish Creek, 14441 Bannister Road SE, Calgary, AB) on Monday, May 16, 2022, at 7:00 p.m. Funeral Mass will be celebrated at St. Bonaventure Catholic Church (1600 Acadia Drive S.E., Calgary, AB) on Tuesday, May 17, 2022, at 11:00 a.m. with Graveside Service to follow. Family and friends who are unable to attend in person are invited to join Joan’s service streamed live (see below) on the day of the service. For those who are unable to view live, a recording of the service will be posted. Condolences, memories, and photos can also be shared and viewed here.