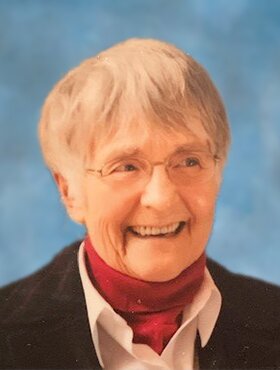 Joan was born in Brooklyn, Nova Scotia and was raised in Glace Bay where she graduated from St Anne's High School. Joan earned her B.A. Honours with Distinction in Philosophy from Mount Saint Vincent College in Halifax in 1950. Joan's post graduate degrees included a B.Ed., an M.A. in Literature, and a B.F.A with Honours in Art. Joan was awarded a Killam Fellowship and in 1978 she completed her Ph.D. in English at the University of Calgary.

Joan’s teaching career took her to New York City, Montreal, Quebec City, Halifax, and to Calgary in 1967 where she taught with the Calgary Catholic School District starting at Holy Cross and Bishop Kidd eventually becoming the Supervisor of Fine Arts for the Calgary Catholic School District from 1973 – 1992. During that time Joan established St. John Elementary School as the first fine arts centered school of its kind in Calgary.

Joan was the recipient of many awards including the Alberta Achievement Award for Excellence in Art Education; The Canadian Society for Education Through Art Gaitskell Memorial Lecture Award; and Phi Delta Kappa Educator of the Year for excellent leadership in fine arts education.

Joan was a published and keynote speaker at national conferences in the arts. Joan was the founder and the director of the Calgary Catholic School District’s Fine Arts Demonstration Centre. When Joan retired in 1992 she continued to manifest her dedication to art, especially in the creation of her glorious watercolour paintings. Her art is represented in private and corporate collections nationally and internationally.

Joan is survived by her nieces Sandy LeBlanc (Paul) and Beth Callaghan (Emmet); her nephews Ian MacLeod (Jo-Anne), David MacLeod (Donna) and Duncan MacLeod (Cheryl); and all of their children, Tom, Dan, Michael, Austin, Steven, Veronica, Kevin, Meagan, Casey, Jordan, Taylor, Connor, and Elyse. She is also survived by her great grandnieces and grandnephews Mackenzie, Parker, Keith, Gracelynn, Avaa, Cillian and Fionn.  Joan leaves to cherish her memory her friends Sheila and Rick Humphrey and Sheila’s children, Melina Stinson and Will Stinson. Joan’s collaborative leadership style led to her team and many other colleagues becoming true friends and they remained so after her retirement. Among the long-time friends who will miss Joan are: Kathleen McCaul, Laureen MacKenzie, Marilyn DeWaal, Mel Luciani, Lorraine Knier, Marilyn Potts, Susan Fuerbringer, Sharyn Favreau, Shirley Hollway and Kath Moors and others too numerous to mention. Joan was always thankful for their calls, cards and visits that so enriched her life.

Joan had the good luck to move into Trinity Lodge for independent living where she spent her last few years reading and enjoying social activities with her friends. The family is grateful to her physician, Dr. Nadine Moneta, and also to the staff of Unit 42 at the Foothills Hospital.

Joan was a wonderful teacher and leader both in the classroom and in life with a remarkable ability as a storyteller and as an artist.  Strength of will, optimism and above all gratitude, were the foundations of her life. Our memories will always hold dear the many Saturday afternoons we spent with Joan at her favourite bookstore, surrounded by books, sustained by caramel macchiatos, immersed in sparkling conversations that renewed all our spirits.

A Celebration of Life will be held a Grey Eagle Resort & Casino (Hotel) on Saturday, June 25, 2022 between 2:00 – 5:00 p.m. If you are planning to attend please RSVP to Sheila Humphrey at:  sheila.humphrey@hotmail.com.