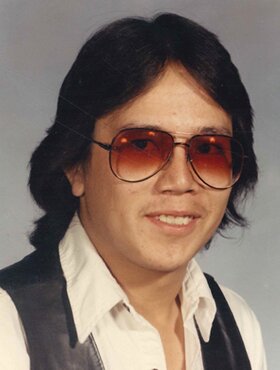 It is with heavy hearts that we announce the passing of our son, father, papa, brother, uncle and friend. Tracey was a family man and loved his community. He had a big heart and was a very loving man to those who were close to him.

Tracey grew up on the Tsuut’ina Nation and lived his whole life close to home. He graduated high school at Bishop Grandin and then went on to further his education. He graduated with his Architectural Design from SAIT and would design structures in his spare time. Shortly after, Tracey returned back to SAIT and enrolled in Vehicle Mechanics where he received his Journeyman Certification. He found his passion and continued the rest of his life working in the mechanics field.

Tracey worked many years on Tsuut’ina Nation at Redwood Meadows and Buffalo Run Golf Courses, where he was the head mechanic and ensured the machinery were up to par. He loved his job and the friendships that he made. He took the young men he worked with as his nephews and would teach them as he worked. He loved Redwood and being up on the west end. On his off days, he spent many hours driving in the flats 4X4ing. Sometimes, he would find a way to get himself and his trucks stuck. Those were times when Mom or one of the siblings would have to go rescue him. Tracey moved on to work with his friends, who leased the shop at the Gas Stop, Gateway Automotive. He worked many years alongside Rob Sinclair and Bernie Sulkers. He enjoyed working on our Nation and helping our community members with their vehicles. He eventually took on the lease and opened shop on his own, which was a lifelong dream of his. He called it Champz Automotive. He hired his nephews, and they all gave him the name Uncle Champ. Tracey eventually ended the lease and moved his business to a home-based location. He still had his clients and worked from his garage. He would spend many hours working on vehicles. His neighbours knew he was hard at work because they could hear is music in the whole neighbourhood. When he was given a home on our Nation, he was so excited to move his business to his new home. He dreamed of one day building a full garage with a hoist to work on more vehicles. He worked out of his home until his passing.

When Tracey was young, he started to cook and enhance his abilities in the kitchen. Everyone was fed good and never had to worry about going hungry. He loved to cook and feed his family as often as he could, which included all hours of the day and night. This was one of the ways he showed them his love. He was the family personal chef.

Tracey’s hobbies included creating model cars and would put them together piece by piece. He would often be found at the dining room table for hours and days on end. He was so in-tune to detail and made sure they all looked perfect right down to the body paint job. He was so creative and always kept himself busy. He loved to create art for his Mom and made sure she had new pieces of his. In the last few years, he started to work with wood and built lamps, frames, and statues. Tracey had a scary passion for driving fast. In his 20’s to 40’s, he would race vehicles at Race City Speedway. His group name was called “Rez Boys Racin”. He loved the adrenaline it gave him, and, when he came home, he would be hyped up to share his race that day. His fast driving gave his Mom a scare, but he didn’t stop. It gave him a rush. His love for the Calgary Stampeders and the Calgary Flames was known to everyone. During game day, he played his tv loud and would cheer proud. He would honk his game horn loudly whenever the Flames would score. His sister and neighbours would hear it from a distance, and that’s when they knew Calgary scored.

Tracey was blessed with two daughters. Being a Dad was his greatest accomplishment. He raised his daughters with love and always made sure they knew how much they meant to him. The bond they had was so special and he took so much pride in being Dad. When he became a Papa, he was even more proud, especially when his first grandson was named after him. He met his best friend Tammy, and together they created a blended family. He loved all five of his children endlessly and was their role model. He always put his children and grandchildren’s needs first and made sure they had what they needed. He was a family man.

Tracey had many sisters and brothers. He had a special bond with each sibling. There are so many crazy memories and stories of their adventures. He was the daring one, the funnest and the wild child. His siblings can share many stories that would have anyone laughing. To his baby sisters he was the craziest and coolest brother ever.

Tracey was a young boy when his biological Mother passed away. He always expressed his love for his Mom Irene and spoke of her often. It was then that he was blessed with his earth parents, his Dad Charlie and his Mother Regena. He was proud to be their son and have their love. He always looked up to his Dad and was so thankful for the love that he was given. His dad taught him many things about being a man and being there for family, which he always did. He moved in with his Mom Regena as a young teenager and completed his schooling. He was her Baby Boy and couldn’t do no wrong. He was always trying to make her proud, and yet he didn’t have to try hard. She was his biggest supporter in everything that he did. She always told the girls to always look after their brother. He was her baby son and loved him so much.

Tracey was a friend to many. He was always there to help others especially in time of need. His close cousins and friends were dear to him. He took them all as brothers and enjoyed spending time with each of them.

Uncle Champ, as he was known, loved his nieces and nephews. He was the Unk that everyone needed in their life. He always said that his siblings gave him nieces and nephews for him to love. He was the Uncle/Dad to many of the kids. He helped his sisters raise their children and always treated them like his own. He had seven God-Children. He was so proud to be a God-Father and took the honour with pride. His faith in God our Creator was strong, and he always reminded family that God was always with us.

Tracey had a love for animals, and he treated them like his children. His fur babies Jayd, Minook, Sheldon and turtle Ophelia will dearly miss him.

Tracey woke up every morning before sunrise. He was always sure to capture the best photos and share them with his Facebook friends. He always told his family to be thankful for another day. In the evenings he would take photos of the lit-up sky setting over the mountains and gave thanks for his day spent. He believed in prayer and would smudge each morning. He believed in his Catholic faith and would say the Lord’s Prayer every day. He was a strong believer and made sure to remind family to always pray.

Tracey fought a courageous battle with his health. The family would like to thank Tammy, Bronson and Roxanne for the care, love and support for him. He appreciated everything they did for him. We truly thank you.

Share Your Memory of
Tracey
Upload Your Memory View All Memories
Be the first to upload a memory!
Share A Memory
Send Flowers