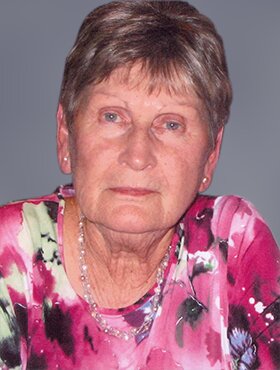 Wollene passed away gracefully on Sunday May 8th at the age of 86 years.

Born in Hanna AB, she spent her early years on the family farm in the Handhills before moving to Hanna where she completed her schooling, then moved to Calgary in the mid-fifties working for an oil company. She married Frank in 1957 and moved to Edmonton where Neil was born in 1958. She moved back to Calgary in 1959 where she has lived ever since.

She returned to work in the printing department at U of C for 9 years while Neil was finishing school. She was an excellent cook, evidence of which were tasty meals of all kinds, delighting family members. She took an Asian cooking course and learned how to make a wide variety of restaurant style specialties. Enticing smells were commonplace in the Mitchell home.

Wollene loved to travel, especially with close friends. She enjoyed her 30 years of summering at the property at Echo Lake, Montana, RVing to California and her highlight, spending a couple of weeks each November in Hawaii with all the family. Her outgoing friendly personality resulted in her having many close, loyal friends but the joy of her life was always family. She was one of the original Calgary Police Wive’s members. She loved the comradery of the CPVA and in over 30 years attended almost every BBQ and Christmas function.

She is survived by husband Frank, son Neil (Lynnie), grandson Max (Dalia); sisters-in-law Dorothy of Sidney, BC and Claire of Ottawa, ON; as well as numerous friends.

As per Wollene’s wishes no formal services will be held. Condolences, memories and photos can also be shared and viewed here. In lieu of flowers, donations may be made to Dulcina Hospice 110 EvansPark Manor, Calgary, AB T3P 0N4. Telephone: 587-230-5500

Share Your Memory of
Wollene
Upload Your Memory View All Memories
Be the first to upload a memory!
Share A Memory
Send Flowers