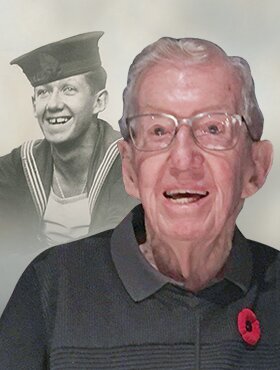 Tom, our amazing life hero, incredible Dad, devoted husband, and generous and loving Grandfather passed away on Monday, May 9, 2022, at the age of 95 years. His beautiful wife Rose Victoria, who was the love of his life for 64 years, predeceased him. Tom died peacefully at his home, Carewest Colonel Belcher Care Centre, surrounded by love.

Tom was the only child of Millie (Letitia Mildred) and Henry Guy Franks and was a fiercely proud born and raised Calgary lad with Irish/English roots. He had a modest upbringing in West Mt. Pleasant, graduating from St. Mary’s High School. He followed in his dad’s footsteps and went into military service, serving in the Canadian Navy from 1944 to 1946 from Aberdeen to Halifax, and Jamaica to Havana. From the decks of the HMCS Warrior, he enrolled in the Commerce Degree Program at the University of British Columbia and graduated in 1954. He was soon to join the incipient ranks of Sun Oil Company as a petroleum accountant.

Tom met Rosina Ronak on a Saturday night in 1953. They fell madly in love on the dance floor and were married on September 25, 1954. Three spirited children soon followed, Terri, Alan, and Brian. They were a close knit and loving family who loved to camp, hike, travel, and spend summers at their favourite lake in Idaho.

With Rose by his side, Tom was always keen to get involved in every and any activity available. They took golf lessons, learned to cross country ski, joined a trailer club, curled together at the Winter Club, and explored and travelled the world. He took up coaching the kids’ sports teams and became a giving and active community member. However, home was always where their heart was and did they ever make that a beautiful and loving environment for their children. Tom and Rose became avid skiers and shared their pride and joy, a Canmore Condo, with family and friends to use on weekends for cross-country skiing getaways in the Kananaskis every winter. Summers were spent lovingly in their garden, golfing, and hiking in his beloved Rockies.

Tom was always a Suncor man and was grateful for a robust and incredible 34-year accounting career with a single company. He was always remembered for being hard-working, honest as the day is long, organized with huge attention to detail, and a devoted employee who got along with everyone. He was quick with a joke and, without any effort, put people around him at ease.

As Tom and Rose became empty-nesters, snow-birding to Hawaii, California, and Arizona became their passion. They loved to golf and connect with their many friends on their journeys, returning with stories, journals, and photos that Rose loved to share and preserve. Tom, who was raised with a strong faith in the Catholic Church, was a dedicated and active supporter of St. Luke’s Parish for many years and attended mass weekly right up until Easter Sunday of this year.

Tom’s pride overflowed with being a grandfather to four beautiful grandchildren; Daniel, Emily, Keegan, and Maryn. They would come for sleepovers and be given endless pampering from Tom and Rose. As they have grown, they have continued to be a source of joy and pride for Tom. Even during the last few months as Tom became frailer, his eyes would still light up and a big smile would emerge at the sight of a grandchild. Tom is survived by numerous nieces and nephews who will miss their Uncle Tom. Despite having three strokes later in life and various other close calls, Tom’s incredible persistence and determination along with a sparkle in his eyes and that Cheshire smile, epitomized never giving up.

The family extends their heartfelt gratitude to the entire staff of Carewest Colonel Belcher for the compassion, wisdom, and care devoted to Tom over the past two and a half years. Tom’s wonderful private caregivers, Karen, Sheryl, Cyril, and Jessica have been instrumental in enhancing Tom’s quality of life and to them we will be forever grateful. In honour of Tom, a private Funeral Mass will be celebrated with immediate family at St. Luke’s Catholic Church. During the summer, the family will host a Celebration of Life for friends and extended family.

If friends so desire, memorial tributes may be made directly to the Alberta Wilderness Association, 455 – 12th Street N.W., Calgary, AB T2N 1Y9 Telephone: (403) 283-2025.  www.albertawilderness.ca, or any other charity of choice.

Condolences, memories, and photos may also be shared and viewed here.

Share Your Memory of
Thomas
Upload Your Memory View All Memories
Be the first to upload a memory!
Share A Memory
Send Flowers