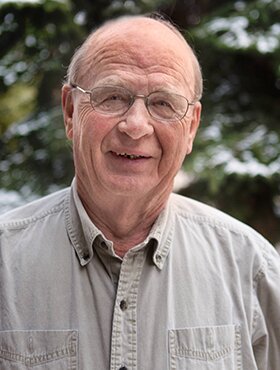 Eldin Eitzen, farm boy, mechanic, pilot, golfer, and beloved husband of Nadia Eitzen (nee Prysunka), passed away in Calgary on Monday, May 9, 2022 at the age of 85 years.

He is survived by his sisters, Bea (Allan Holmes) of Airdrie, and Darlene MacKenzie of Calgary; and many nieces and nephews. Eldin was born and grew up in the farming communities around Acme, with the family eventually settling in the small town of Airdrie. At a very young age, Eldin attended SAIT and immediately after graduation, started his career as a mechanic for International Harvester.  He retired as district service manager for Western Canada after 42 years with the company. During the early years, Eldin developed a love for flying and repairing small planes. At the age of 21, Eldin met Nadia at a barn dance in Balzac and a year later, they were married. They have three children. Debbie (Bentley Woudstra) living in Switzerland, Gary (Maureen Parkinson) and Murray living in Calgary.  They also have two much-loved grandsons.  Mack followed in his grandpa’s flying and mechanical footsteps and is working as an engineer in the space industry. Ronan has spent hours, every week for the past eleven years, with his grandpa building and inventing mechanical contraptions.  Grandpa’s love for mechanics will surely live on in his two grandsons.

In his retirement years, Eldin and Nadia frequently travelled to Switzerland and Europe. Eldin enjoyed Saturday morning breakfasts and chatting with the pilots at the Springbank Flying Club.  He loved his weekly summer golf games with a great group of friends.  He also cherished 56 years of living in Lakeview and having enduring friendships with the neighbours, especially the Blaskens.

Funeral Services will be held at McInnis & Holloway (Park Memorial, 5008 Elbow Drive SW, Calgary, AB) on Tuesday, May 17, 2022 at 2:00 p.m. Reception to follow in the Hospitality Centre at the Funeral Home. Condolences, memories, and photos can also be shared and viewed here.

Share Your Memory of
Eldin
Upload Your Memory View All Memories
Be the first to upload a memory!
Share A Memory
Send Flowers