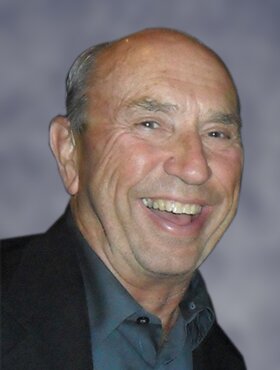 William Hoogstraten, beloved husband, father and grandfather, passed away on Tuesday, May 10, 2022 at the age of 83 years.

Bill was born in Winnipeg on March 3, 1939.  He had a happy childhood playing hockey on outdoor rinks and claiming to walk 5 miles to school in the middle of a snowstorm. Bill married Esther, the love of his life, in 1960 and enjoyed a life full of adventure and laughter with her that lasted 62 years. They moved to Calgary in 1962, where they raised their family.

Bill enjoyed a successful 25-year career with WG McMahon. He was a proud member of the “Early Birds” breakfast club for over 20 years where he fostered great friendships and memories. He went on to pursue a career as an entrepreneur in advertising and later established “Sundog”, partnering with his son, a venture that continues to this day.

Billy was a humble man who enjoyed life to the fullest.  He loved the great outdoors. Camping, riding endless cut lines on his vast array of motorcycles, sailing his prize vessel, “Fast Esther”, duck hunting and golfing, but his true passion was fishing.  He would often sneak off with Carrie to get the last casts in before the sun went down. His two favorite fishing holes were Loon Lake and Sylvan Lake. At Loon Lake he would catch his favorite pickerel, or as Bill described it “steak of the lake”!  Sylvan Lake became a favorite fishing spot with the kids, grandkids and lake friends. It was a special place where Billy and Esther enjoyed over 30 great summers. The annual “Horseshoe Happening” was a big hit and enjoyed by all.  It was a happy place where they created memories and established lifelong friendships.

In retirement, Bill and Esther enjoyed traveling. Whether it was a cruise, a sunny beach or a bike trip through Italy, they were game to try anything. The special spot for so many years was Cabo San Lucas in a condo which they generously shared with the family until deciding on southern Florida to escape the cold Canadian winters and to be close to their daughter.

Billy loved eating good food and was always interested in seeing what was cooking, popping into the kitchen to investigate what was on the menu. His claim to fame in the kitchen was making his spicy Thai food that put all the girls into labor.

He always enjoyed a good campfire where he was ready to settle in for a visit, a game, a debate or just to enjoy some music with friends and family. He loved listening to the boys play their guitars while enjoying a well-poured rum! Little known fact is that Bill loved classical music which he referred to as “long hair music”.  His favourite though, was Fats Domino’s “Blueberry Hill” that would often result in a Bill and Esther jive session.

Billy’s love of people was expressed often with his great laugh and appreciation for humor.  He will be remembered by all that knew him as a kind, loving, gentle soul.

Bill is survived by his loving wife Esther Hoogstraten (nee McClements), his children Rod (Dianne) Hoogstraten of Calgary, Corinne (Rob) Wasslen of Calgary and Carrie (Brian) Bradley of Tampa. Bill was also genuinely loved by all his grandchildren Zennon, Curtis, Tanner, Kevin, Brianne, Cody and Trey. Bill is also survived by his sister Janis and her son Neil. William was predeceased by his father Neil and mother Vinia of Winnipeg.

There will be a celebration of life at a later date and time to be determined. Condolences, memories, and photos may be shared and viewed here.  The family would like to express our sincere gratitude to the staff on the 3rd floor Sunnyside Central Unit at the Brentwood Care Center for their generous caregiving to Bill and support to Esther and our family.