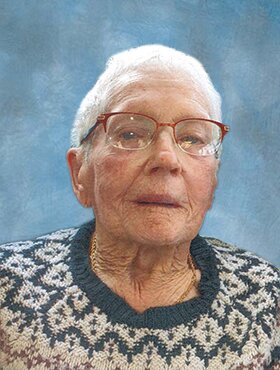 Margaret Agnes Hopkins (nee Brown) of Calgary, AB, passed away on Thursday, May 12, 2022, at the age of 93 years. On February 27, 1953, she married George Lyle Hopkins, whom she remained married to until his death on November 2, 2015. Margaret was predeceased by her father, Hugh Charles Brown, and mother, Margaret Elizabeth Brown (Birney). She was the youngest of six children, and predeceased by her siblings, Hugh Brown, Helen McMahon (Brown), Raymond Brown, Jennie Brown, and Kenneth Brown.

Margaret and George built a life in Calgary that served as the anchor for the extended family for over half a century. She brought the family together every week for family dinner, we danced and sang together in the kitchen, and the Hopkins household was a highly coveted spot for a sleepover. We learned about both friendly competition and honourable defeats through simple card games around the dining room table. Margaret ensured the cookie jar was always full, the knitting needles or sewing machine busy creating or repairing something, and the garden bursting with colourful flowers. Most importantly, her family knew that they were incredibly loved, and she was immeasurably proud. Margaret loved all sports (except wrestling), and Friday afternoon bowling was a permanent fixture on the calendar.

Margaret battled Parkinson’s disease, and the last few years it took hold like a heavy, slow falling snow. It covered her completely for stretches of time, but periodically the sun shone brightly enough to release her for a while. It was during those times that her family was able to see her perk up at a long-forgotten song, dress appropriately for dinner (shoes, not slippers - always), catch a football or baseball game on TV, and enjoy some chocolate from a hidden stash. She would quietly share what she really thought of the woman who cut her hair last or if the laundry was folded wrong. Those glimpses of the tiny, sassy matriarch of the family were celebrated and cherished. As the periods of heavy quiet extended in duration, we would visit to share great memories and update Margaret on the new adventures we were embarking on. Even if she was unable to respond, we knew she heard it all.