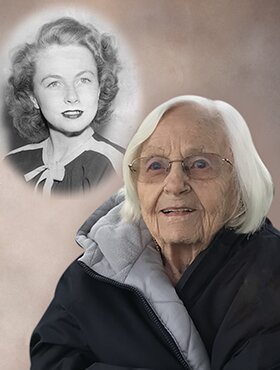 Evelyn was born in Piapot, Saskatchewan, Canada on September 6, 1928. She was one of six siblings born to Jessie, originally from Inverness, Scotland, and Henry (Edward) Haley, originally from Moorhead, Minnesota.

Evelyn met her future husband, Clyde Heffley, shortly after he returned from active duty with the Canadian Armed Forces, in WWII. They wed on April 16, 1949. They started their family shortly after marriage.  Their first child was daughter Brenda and seven years later their son Scott arrived. Evelyn mainly worked in retail at numerous department stores.  Her last position before retirement was department lead, at Woodward’s in Calgary, AB.  She loved to assist people and took pride in her job.

At the early age of fifty, she and Clyde started their retirement in Nakusp, BC.  They spent many hours riding on Clyde’s Honda Silverwing, and boating on many pristine, nearby lakes. From there, they had numerous adventures including wintering in Mesa, AZ.  They enjoyed going out to the desert in the evenings and watching the beautiful sunset, with a glass of bubbly. Evelyn always enjoyed her times with family and friends, looking forward to preparing delicious snack trays for happy hour.  She was a second mother to all. She loved being a mother, grandmother, and great-grandmother.

Evelyn was predeceased by her husband Clyde, December 31, 2015, her parents, Jessie, and Henry (Edward); her siblings, Ronny, Charlie, Donna, and Beth.

Evelyn was much loved and will be greatly missed by family and friends. Condolences, memories, and photos may be shared and viewed here.

Share Your Memory of
Evelyn
Upload Your Memory View All Memories
Be the first to upload a memory!
Share A Memory
Send Flowers