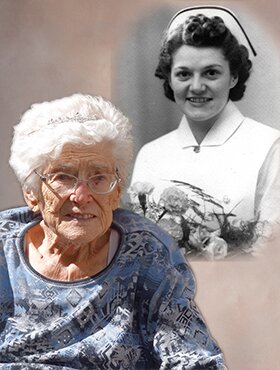 It is with a sense of marvel and gratitude that the family of Madge Louise McAdam (nee Campbell) announces her peaceful passing at the age of 104.

Madge came to Canada as an infant and her family settled in Alberta, where she made her home for the rest of her life. From a humble homestead in Chancellor, to time in Edmonton, Lethbridge, and Calgary, Madge made fast friends wherever life took her. After graduating from training at the Holy Cross Hospital, she made her mark as a registered nurse with memorable posts including a TB sanatorium and leadership positions. Upon retirement, she was an active volunteer as a cuddler for NICU babies and in palliative care.

In 1942, Madge married Bill McAdam (the grandchildren never did see those love letters she snatched away with her signature cheeky grin) and in 1950 the couple moved into the small white bungalow Bill built in Tuxedo Park. Her home of 60 years still stands. The couple raised three daughters and Madge was active in everything from organizing figure skating lessons, Home & School, canvassing for charities, and the Holy Cross Alumnae Association. In 1969, Madge returned to nursing at the Holy Cross and retired as Associate Director of Nursing.

Madge had an exceptional sense of curiosity and was always game to try new things and visit new places. She delighted in travelling in Canada, the USA, Scotland, England, Europe, and the Caribbean. She was an avid gardener and particularly loved tending to her famous flower beds. Skilled with knitting needles and a crochet hook, Madge took great joy in creating memorable projects for family and friends.

For the past twelve years, Madge’s home has been United Active Living Garrison Green. The family would like to thank all the staff and Alberta Health Services Home Care for their care and support.

A private family gathering will be held at a later date. If friends so desire, donations may be made to Holy Cross Alumnae at 327 Deer Run Cres SE, Calgary AB, T2J 5N9, https://www.hxhnursing.com/donate/ or to Calgary Health Foundation’s Newborn Need program at https://www.calgaryhealthfoundation.ca/ways-to-give/

Share Your Memory of
Madge
Upload Your Memory View All Memories
Be the first to upload a memory!
Share A Memory
Send Flowers