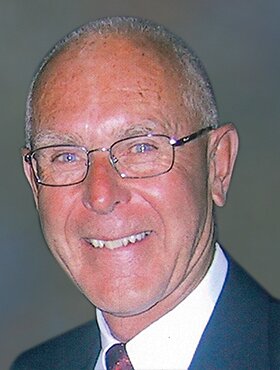 Martin was born in Walton-on-the-Naze, England on February 28, 1939. He immigrated to Canada in 1956 and settled in Toronto, ON with help from his Canadian family, the Sneyds. Once he arrived in Canada he started working for CIBC, where he retired from, after 37 years, in 1993.

He was inducted into the Royal Canadian Golf Association (RCGA) Hall of Fame in 2017. Martin accomplished much through his life and was proud of time spent with his Church. He sang in the choir and volunteered at Grace Presbyterian Church in Calgary and before that at Calvary Baptist Church in Toronto.

A lifetime of volunteer work was spent in the amateur Golf and Hockey communities. His accomplishments include an executive position in the RCGA, volunteered with the Alberta Amateur Golf Association, Alberta Amateur Hockey, past president of the Macs Midget Hockey Tournament, Club Captain at Canyon Meadows Golf Club, Vice President Metro Toronto Hockey League (MTHL) and lifetime member of the Ted Reeve Hockey Association.

A Memorial Services will be held at Grace Presbyterian Church (1009 – 15th Avenue SW, Calgary, AB) on Wednesday, June 22, 2022 at 11:00 a.m. Reception to follow in the church hall. Condolences, memories, and photos may be shared and viewed here. If friends so desire, memorial tributes may be made directly to the PSP Society of Canada, PO box 40, Station Main, Kingston, ON, K7L 4V6, Telephone: 1-888-675-0230, www.pspspcietycanada.ca.

Share Your Memory of
Martin
Upload Your Memory View All Memories
Be the first to upload a memory!
Share A Memory
Send Flowers