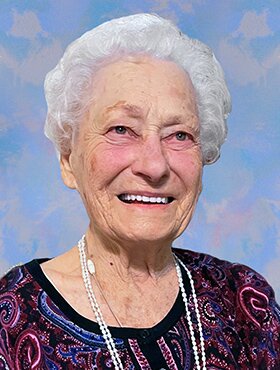 Frances was born in Budapest, Hungary, on September 17, 1928, and immigrated with her beloved husband, Henry, to Canada in 1951. In May 1952, Frances and Henry moved with their family to Symons Valley, Calgary. Grandma, as she was known, not simply to her own grandchildren, but so many others as well, remained on the farm as long as she could following Henry’s death, after 65 years of marriage.

Frances was known throughout the district, and beyond the province’s borders, not only for her apple pies and exquisite tapestries, but for her resilient cheer and many contributions to the community through the Casa Loma Ladies’ Association.  Frances was devoted to her family. Visits from grandchildren and great-grandchildren brought her special joy particularly as she weakened. Although bones failed and memory receded over the past few months, the strength of her love never did.

Family requests that in lieu of flowers, donations be made to the Calgary Catholic Immigration Society, 1111 – 11 Ave. S.W., T2R 0G5. Calgary; and or Calgary Health Foundation 11012 Macleod Trail S.E., Calgary T2J 6A5.   https://www.ccisab.ca/donate.html

Share Your Memory of
Frances (Franci)
Upload Your Memory View All Memories
Be the first to upload a memory!
Share A Memory