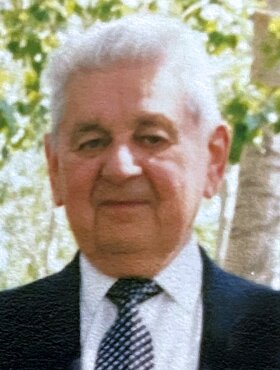 Olgierd (Olek) Zbigniew Dobrzynski, age 98, passed away in the early morning of Monday, May 30, 2022, at AgeCare Walden Heights in Calgary, AB.  He is survived by his wife Irena, daughter, two granddaughters, and five great grandchildren.

Olek grew up in the Novogrodek region of Poland.  Shortly after the Soviet Union invaded Poland during WWII, he, together with his mother and brothers, was deported to a camp in Siberia where he found creative ways to survive the extremely harsh conditions.  Upon the signing of the Sikorski-Mayski Agreement in 1941 Olek and his family were freed and made their way south out of the Soviet Union.  Olek later joined the Free Polish Army under General Anders and became an officer.  He participated in the Allied invasion of Italy in 1943 in the Poland 3 DSK Division (3 Dywizja Strzelców Karpackich or 3rd Carpathian Rifle Division).  He took part in the decisive Battle of Monte Cassino in early 1944 and was wounded at the battle of Bologna.  Olgierd was awarded the Polish Cross of Valour.  It is awarded to an individual who “has demonstrated deeds of valour and courage on the field of battle”.  As well as Italy, his career with the army took him through Iran, Palestine, and Egypt.

After the war, Olek travelled to England to settle as a political refugee.  There he met and married Irena and established a home in London.  When he retired, Olek and Irena moved to Calgary to join their daughter and her family.  Olek cherished the time he spent with his wife and family during their retirement years, traveling and volunteering as an active member of the Polish Canadian Seniors Association.  He had a passion for classical music and history.  He was always ready to share an incredible story about his war time experiences.  Olek will be dearly missed by all who knew him.

Our family wishes to extend a heartfelt appreciation to the attentive and caring team at AgeCare Walden Heights where Olek spent the last few years of his life, and especially to Resident Care Manager Alina Wlostowska-Stach, RN for all her kindness and support.

A Private Family Funeral will be held, with burial to follow at Queens Park Cemetery, (3219 4 st NW, Calgary). Condolences, memories, and photos can also be shared and viewed here.

Share Your Memory of
Olek
Upload Your Memory View All Memories
Be the first to upload a memory!
Share A Memory
Send Flowers