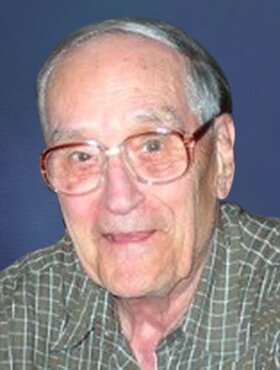 George Steer beloved husband of Ruby Yvonne Leveque of Calgary, AB, passed away on Tuesday, May 31, 2022 at the age of 96 years.

George's parents Melvin from Ontario and Annie from England had six children, John, Melvin, Alfred, George, Lawrence, and Keith, all but one born in Moose Jaw.

George married Yvonne in Edmonton, AB on September 13, 1947 and raised their two children, Greg and Elaine in a house he built in Edmonton, AB. The family later moved to Calgary, AB in 1968 where George built his own garage. George and Yvonne lived in Calgary until Yvonne passed away in 2009, after 62 years of marriage.

George worked for Massey Ferguson his entire working life, achieving the position of parts manager, and retired early after Massey closed the warehouse. He enjoyed collecting many different things and working on various wood working projects including a grandfather clock, roll top desk and hundreds of children's toys. He loved playing Bridge and was an active member of the 50 Plus Club.

He was a great father to Greg and Elaine, wonderful grandfather, and great grandfather, being unbelievably patient, understanding, and supportive in the many twists and turns in our lives.

Share Your Memory of
George
Upload Your Memory View All Memories
Be the first to upload a memory!
Share A Memory