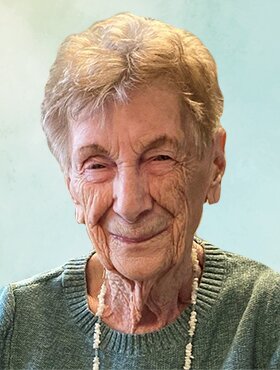 It is with heavy hearts that we announce the passing of our dear mother, Lois Sheppard on Wednesday, June 1, 2022 at the age of 98 years.

Lois was born in New Brunswick on June 12, 1923 and had a twin brother Lloyd (deceased). After graduating from teacher’s college, she taught school at Gagetown Military Base in New Brunswick, then moved to Rouyn-Noranda, Quebec where she met her husband, Jack. They were married for 58 years until Jack’s passing in 2014.

In 1967 Jack, Lois and their five children moved to Garson, Ontario and Lois taught school at LJ Atkinson PS until her retirement in 1983. Jack and Lois retired in Kanata, Ontario where they enjoyed golfing, curling, and spending the cold months in Florida with dad’s sister Ilean and best friend Norm Doiron. She moved to Calgary, AB in 2014 and resided at Trinity Lodge Retirement Home for eight years, then after a brief illness in February, was moved to Intercare Chinook Care Home, Calgary, AB.

Lois will be dearly missed and is survived by her daughters, Cindy (Kamil), Dianne (Doug), Kathy (Jamie), Joanne (Larry), and John (deceased) (Danielle). Lois had nine grandchildren, Amy, Susan, Camilla, Andrew, Kyle, Chris, Tyler, Marc, and Kristin (deceased). She also had several great-grandchildren, Mila, Charlie, Jack, and Presley. She is survived by her dear sisters-in-law, Ilean, Lois, Yvette, and Aline; and a brother-in-law, Dean; as well as numerous nieces and nephews. All of Lois’s siblings predeceased her, Lucille, Hilda, Lloyd, Shirley, and Russell.

We would like to thank the staff at Trinity Lodge, Rockyview Hospital, and Intercare Chinook Care Home for their care.

If friends so desire, memorial tributes may be made in memory of Lois Sheppard directly to The Alzheimer Society of Alberta, Administrative Office, 10531 Kingsway Avenue, Edmonton AB T5H 4K1.  Tel: (1-866) 950-5465, www.alzheimer.ab.ca.

As per Lois’s request, there will be no funeral at this time but a Celebration of Life at a later date. Condolences, memories, and photos can also be shared and viewed here.

Share Your Memory of
Lois
Upload Your Memory View All Memories
Be the first to upload a memory!
Share A Memory