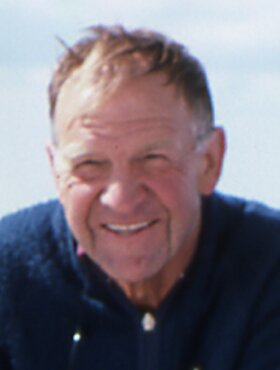 Hans Stocker, beloved husband of Martha Stocker (nee Jaeger) of Cochrane, AB, passed away on Thursday, June 2, 2022 at the age of 92 years.

Hans was born in Thayngen, Switzerland, in 1930. After finishing school, he apprenticed as a millwright. Hans joined the Swiss military in the Pontonier unit based in Schaffhausen in 1949, ultimately achieving the rank of Feldweibel (Sergeant Major). In 1954, Hans came to Canada to spend a year exploring and working, planning to return to Switzerland to marry his fiancée Martha and resume his life there. He quickly realized that Canada was where he wanted to remain, so in 1955 Martha travelled to Canada and they were married in Ottawa upon her arrival. True to their adventurous spirits, Martha and Hans spent their honeymoon hitchhiking across Canada to their first Canadian home - a log cabin in a lumber camp near Skookumchuk, BC. A new opportunity took them to Yellowknife, NT, where their eldest daughter Eva and son Rudi were born. Subsequent moves to Canmore and then Calgary followed, together with the arrival of their second daughter Monica. In 1972, Hans relocated his family to Manila, Philippines, and then to Salinas, California. In 1974, the family returned to Calgary.

After retiring from their long and successful careers, Hans and Martha bought their dream property - a small acreage nestled in the foothills of the Rocky Mountains near Water Valley, AB. They spent 25 happy years in their chalet in the woods. In 2019, they moved to Cochrane, AB.

Hans was a gregarious adventurer who easily struck up friendships wherever he went. His experience from the Pontonier led to many canoe trips in the Northwest Territories as well as leisurely floats and canoe races on the lakes and rivers of Alberta, Saskatchewan, and BC. His love for the mountains had him leading his family on endless backpacking trips, cross-country skiing and ski mountaineering expeditions, and mountain climbing, as well as a couple of closer-than-comfortable encounters with bears. In retirement, Hans and Martha undertook multiple cycling trips in Cuba, backpacked in Patagonia, kayaked in Belize and Mexico, and trekked in the Swiss Alps.

Hans was a Scout throughout his years in Switzerland and volunteered with Scouts Canada as a Cub and Scout Leader and then as a member of the BP Guild. He gave generously of his time to community groups including the Dartigue Community Association. Hans was a longtime member of the Swiss Cultural Society of Calgary. He also crafted the wrought-iron door hinges and handles for St. Mary’s Parish in Cochrane and donated many pieces of his handiwork for charitable fundraising.

Hans passed away peacefully at the Dulcina Hospice in Calgary with Martha, his devoted wife of 67 years, at his side. He also leaves behind his three children, Eva (Gary Kuefler), Rudi (Nancy), and Monica (Dave Wagner); eleven grandchildren, Paul, Bart, Joseph, Matthew, Katherine, and Peter-James Kuefler, Peter and Marc Stocker, Paul and Stephanie Wagner, and Cassidy Frayn; and twenty great-grandchildren.

Funeral Mass will be celebrated at St. Mary’s Catholic Church (East of the James Walker Trail and Highway 22 intersection, Cochrane, AB) on Wednesday, June 15, 2022 at 11:00 a.m. Reception to follow. A private family interment will be held at the Cochrane Cemetery. Family and friends who are unable to attend in person are invited to join Mr Stocker’s service streamed live (see below) on the day of the service. For those who are unable to view live, a recording of the service will be posted. Condolences, memories and photos can also be shared and viewed here.

Share Your Memory of
Hans
Upload Your Memory View All Memories
Be the first to upload a memory!
Share A Memory
Send Flowers