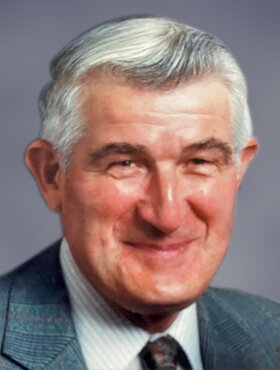 Henry (Aubrey) Arthur Pithers of Calgary, AB, passed away on Friday, June 3, 2022 at the age of 94 years. After immigrating to Canada with his brother Maurice in 1958, Henry brought his wife Elizabeth and young family to Calgary in 1959. Henry joined the RCAF and they travelled extensively with postings to CFB Penhold Alberta, 2 Wing France and 3 Wing Germany. After retiring from the Air Force settling in Red Deer and finally, dividing their time between Calgary, the Mountains of Mourne in Ireland and Phoenix, Arizona.

Henry was known for his love of history, travel and cars (competing numerous years in the arduous Circuit of Ireland Rally). He was never happier than when he was taking others on a road trip around Ireland, Alberta or Arizona. Dad lost much of his get up-and-go when he lost the love of his life and dear travel companion Elizabeth to Alzheimer’s in 2017.

Henry will be lovingly remembered as a dear father to his daughter and son-in-law, Fiona and Dan Bartok; his son and daughter-in-law, Terence and Joanne. He will also be greatly missed by his sister Margaret Dodds, sister-in-law Edith Pithers, extended family, friends and many nieces and nephews and members of the Calgary Community Church.

A private family Funeral Service will be held at McInnis & Holloway (Park Memorial, 5008 Elbow Drive SW, Calgary, AB) on Thursday, June 9, 2022. A private reception to follow in the Hospitality Centre at the Funeral Home. Graveside Service to follow at Queen's Park Cemetery. Condolences, memories, and photos can also be shared and viewed here.

If friends so desire, in lieu of flowers memorial donations may be made directly to Veterans Association Food Bank https://veteransassociationfoodbank.ca/.

Share Your Memory of
Henry
Upload Your Memory View All Memories
Be the first to upload a memory!
Share A Memory