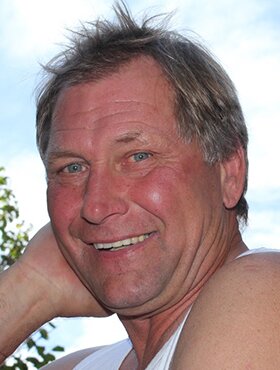 Wayne Zaychuk, cherished and beloved husband of Shannon Zaychuk passed away on Friday, June 3, 2022, at the age of 65. The twinkle in Wayne’s eye and the heartwarming, endearing smile that could spread across his face to light up any room will live forever in the hearts of those who knew him. Wayne’s fierce (some would say, a little over the top) work ethic of “do it right and get it done” has left many building projects and plumbing jobs completed in the homes and cabins of his close circle of loved ones.

Born December 19, 1956, to Jack and Mary Zaychuk, Wayne is predeceased by his parents and his older brother Gary Zaychuk (Penny). Wayne is survived by his wife and best friend, Shannon Zaychuk, and his daughters Cassie Zaychuk and Terra Zaychuk, both born to Wayne and his first wife, Brenda Wallace.  He is also survived by his mother-in-law Esme Fleming, his sister-in-law Penny Zaychuk and his brothers and sisters-in-law, Marilyn and Chuck Kruse, and Bob and Julie Fleming.

In December of 2020, Wayne underwent an emergency surgery due to complications from longstanding Crohn's. The surgery proved to be overwhelming for Wayne’s system and the last 18 months have been spent trying everything he could to find his way back from the fallout. Wayne was released from this challenging struggle on June 3, 2022.

Wayne had a long-standing and successful career as a plumber and mechanical contractor, where he was respected for his high standard of workmanship and his unique attention to detail and quality.  After working for several large companies, Wayne founded Rafter WZ Mechanical over 35 years ago. In more recent years, he made many new friends working as a plumber on the Maintenance Team at the Rockyview General Hospital.

Wayne never stopped wanting to learn his craft and trade – work was his art. He was a sponge for anything to do with buildings, construction, and all things mechanical. Wayne spent many a holiday hour chatting up the trades people in countries he would visit, always eager to understand their different processes and practices. It was not at all uncommon for him to stay at a hotel, lay in bed diagnosing what needed attention with their plumbing or boiler system, then share his findings with whoever might listen as he was checking out.  On the rare occasion he was invited to, Wayne was only too happy to take staff to the basement and advise them on how to prevent a large bill or future breakdown in their mechanical system. He frequently got a thanks from those who did.

With a love of leisurely Sunday dinners, Wayne seemed most satisfied and content after spending time with his dearly loved and treasured girls, Cassie and Terra, and mother-in-law Esme. Cassie and Terra are, and always will be the light of Wayne’s life, and it’s certain he’s already finding ways to protect and care for them from the other side.

Wayne was an avid outdoorsman and for over 35 years, looked forward to the annual hunting trips he took with his best buddies Pat and Ken.  The mountains were Wayne’s second home.  Besides hunting, fishing, hiking, and spending early mornings watching the movements of bears and sheep through his spotting scope, Wayne sought the solace of the mountains whenever he needed to clear his head or make a big life decision.

In 2019, Wayne fulfilled a long-standing dream by purchasing a white Z06 Corvette. He and Shannon had two memorable summers putting on their craziest sunglasses and driving all the (paved) backroads they could find, before topping the day off with a treat from Dairy Queen. It’s hard to say for sure, but if there was one thing Wayne loved more than cars it would have to be boats…. he loved sleeping on them, fishing from them, riding in them and hanging out at the Marina simply admiring them.

As he takes his final ride from this Life across those unchartered waters stretching to the other side - our hearts are both heavy with missing him and lifted up in knowing he is finally free.

Funeral Services will be held at McInnis & Holloway (Fish Creek, 14441 Bannister Road SE, Calgary, AB) on Friday, June 10, 2022 at 1:00 p.m. Reception to follow in the Hospitality Centre at the Funeral Home. Condolences, memories, and photos may be shared and viewed here. If friends so desire, in lieu of flowers, memorial tributes may be made directly to the Canadian Wildlife Federation, 350 Michael Cowpland Drive, Kanata, ON K2M 2W1, www.cwf-fcf.org .

Share Your Memory of
Wayne
Upload Your Memory View All Memories
Be the first to upload a memory!
Share A Memory
Send Flowers